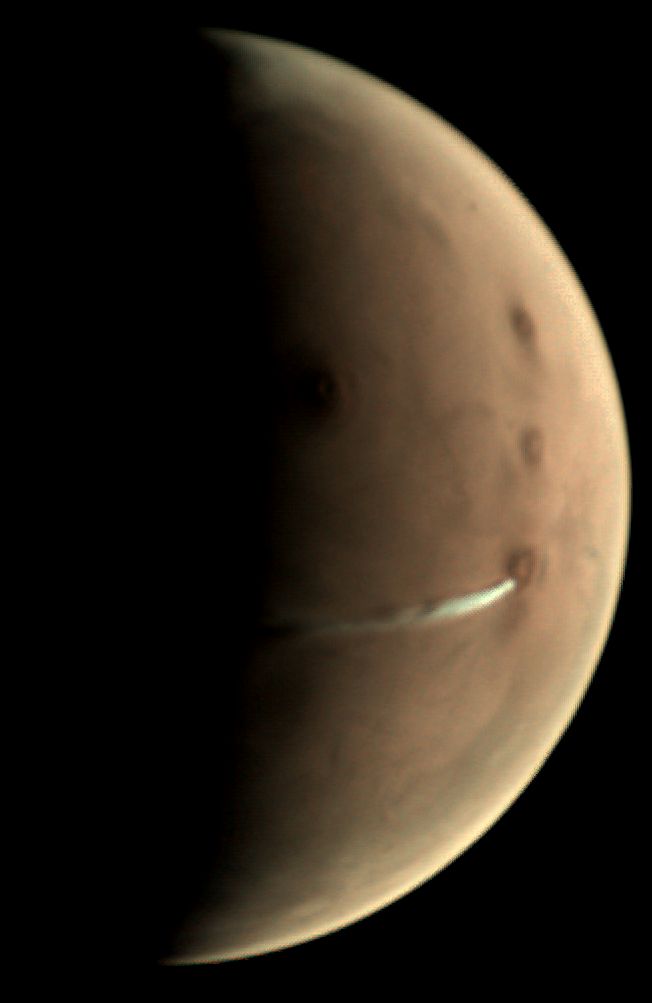 Do Mars’ volcanoes erupt today? This has been a long-standing question in planetary science. From the Martian meteorite basalts (shergottites), we know that martian volcanoes have erupted within the past approximate 180 million years, which is very recent in terms of solar system geology. Elsewhere in the solar system, proof of active volcanism comes from images of erupting volcanoes or outgassing vents (for example, hot lava flows and sulfur-rich gas plumes of Io, and the water-rich gas plumes of Enceladus).

No such eruptions or plumes have been observed on Mars, but recent images from the Mars Express orbiter show a long cloud stretching away from the Volcano Arsia Mons. Is this a cloud of ash and gas from an eruption? Sadly, no. The reflectance spectra of the cloud show it is made only of water ice and vapor, and not volcanic ash and gases. Clouds like this commonly appear at the tops of mountains, as winds blow over the mountain and air is forced upwards to colder temperatures; the cloud forms as water in the air condenses as liquid droplets or ice. Clouds like this appear regularly over Arsia and Mars’ other tall volcanoes, part of Mars’ seasonal cycle. So we still don’t know if Mars’ volcanoes can erupt today.