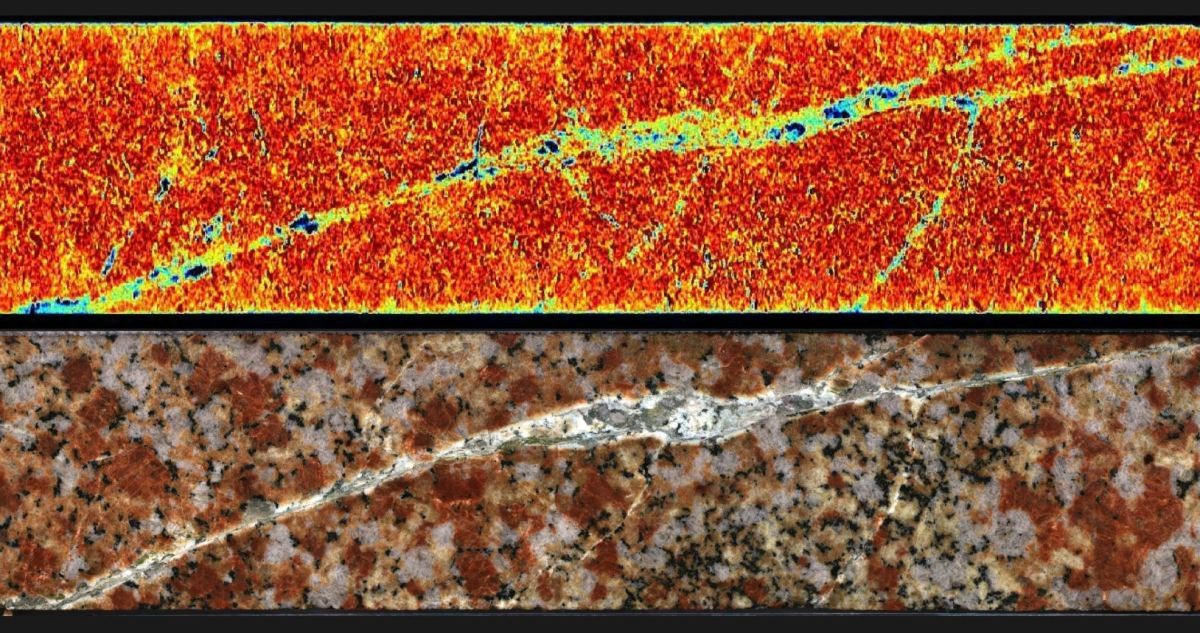 The bottom image is a scan of a section of the core composed of granite. The diameter of the core (which is equal to the height of that portion of the picture) is 83 mm. The upper image is a computer tomography (CT or CAT) scan of the same section of core. The scan is produced with X-rays. Image credit: MMowat@ECORD_IODP

When the dinosaur-killing asteroid struck what is now the Yucatán Peninsula 66 million years ago, rock in the Earth’s crust was shattered and flowed to form the Chicxulub impact crater. New results from a drill core into the crater’s rock have revealed what happened in the first ten minutes of that catastrophe. Nearly instantaneously, the once immobile granite near the impact site began flowing at speeds of more than a hundred kilometers per hour, travelling up to tens of kilometers away (and up and back down) to form the crater’s central peak and peak ring. Shattered rock ejected from the crater moved even faster, with speeds in excess of 20,000 kilometers per hour. How, scientists wonder, was rock so suddenly transformed? Recent work, led by Ulrich Riller at the University of Hamburg, shows how rock is catastrophically weakened by an impact and then regains rock strength as a peak-ring is emplaced. Detailed studies of rock deformation features in the recovered 1.3 km deep core from the Chicxulub peak ring show the deformation occurs in a multi-stage process that is generally consistent with acoustic fluidization. READ MORE