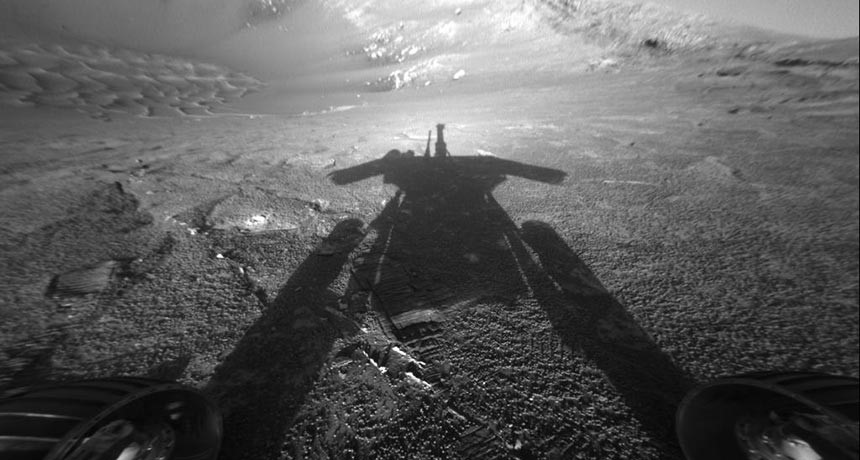 After almost 15 years of exploring the surface of Mars, NASA’s Opportunity rover mission has come to an end. The rover stopped communicating with Earth in June 2018 after a severe Mars-wide dust storm. Repeated attempts to revive Opportunity were unsuccessful, resulting in NASA officials announcing the end of the mission on February 13, 2019.

Opportunity, designed to last just 90 Martian days and travel 1 kilometer, landed on Mars on January 24, 2004. The rover greatly surpassed all expectations by exceeding its life expectancy by 60 times and travelling more than 45 kilometers (28 miles), holding the record for longest rover trek on any world other than Earth. The rover’s mission of finding evidence of water on Mars was fulfilled almost as soon as it started operating by taking an image of exposed layered bedrock, interpreted to be sediments deposited by water. Throughout its traverse, Opportunity repeatedly detected signs of ancient water activity such as hematite spheres and gypsum veins. It returned more than 217,000 images, exposed 52 rock surfaces for chemical analysis, and brushed 72 additional targets to prepare them for spectrometer and microscopic imager studies. In 2005, Opportunity detected the first meteorite on another planet. It’s the end of a highly rewarding mission, which not only provided fundamental new scientific knowledge of Mars, but also demonstrated how to successfully operate a rover on a different planet. READ MORE »