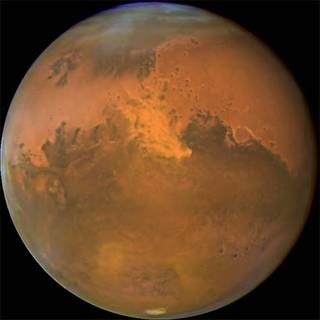 Recent analysis of radar observations from the European Space Agency’s Mars Express spacecraft suggests liquid water is present beneath the south polar ice cap of Mars. However, the study does not address how the liquid water could have gotten there, so the physical and geological conditions required to produce melting of ice at this location remains unclear. In a new study, Michael Sori and Ali Bramson used thermophysical models to constrain the parameters necessary to generate liquid water beneath the ice cap. They modeled temperatures in the subsurface to estimate the amount of heat coming out of the interior of the planet. As salt lowers the melting point of ice significantly, they also investigated if salt at the base of the ice cap could melt the ice. They found that salt alone would not change the melting temperature enough to melt the ice. They argue that if the liquid water interpretation of the radar observations in the previous work is correct, magmatic activity in the last 1 million years resulting in a magma chamber at less than 10 km depth is necessary to raise the temperature high enough to melt the ice. READ MORE »