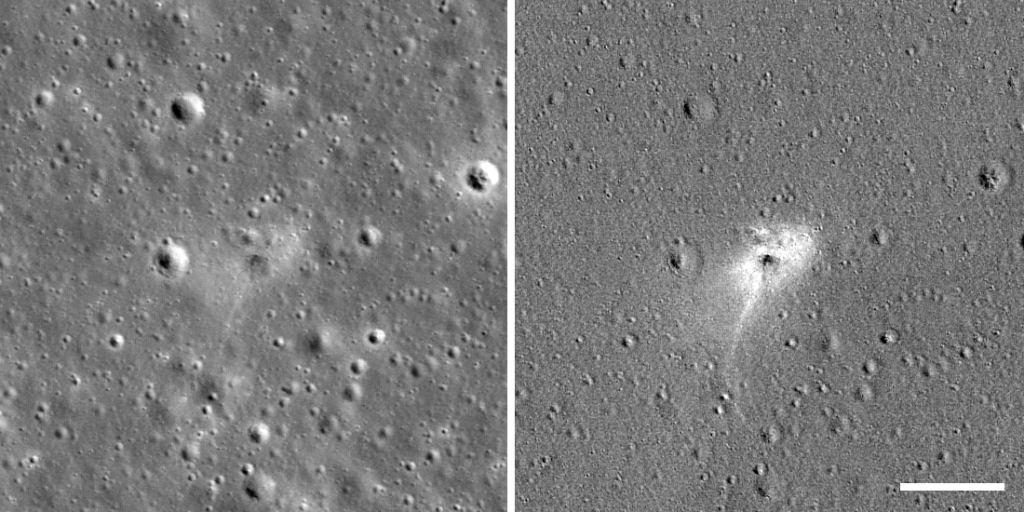 On the left, the Beresheet landing site is seen by the Narrow Angle Camera (NAC) on board LRO. On the right is a ratio image of after/before NAC images (M1310536929R/M1098722768L), which makes it possible to see the subtle changes to the surface due to the impact. The scale bar is 100 meters long. Image credit: NASA/GSFC/Arizona State University

The Lunar Reconnaissance Orbiter Camera (LROC) has identified the final resting place of the Beresheet lander. As you may remember, the SpaceIL spacecraft successfully entered lunar orbit on April 4, 2019. It was less than 1 kilometer from the Moon when it experienced a critical failure, which caused the lander to crash into the lunar surface on April 11. While the lander did not make the intended soft landing, it is important to remember that simply reaching the Moon was a tremendous milestone for a commercial company. From a science perspective, the resulting impact is actually useful. Because the impact of the lander modified the surface, it provides fundamental information about the structure of the lunar regolith. As a bonus, the LROC team can now periodically re-image this location to see how fresh materials evolve over known timescales when exposed at the lunar surface. Beresheet joins the ranks of other crater-making spacecraft, along with the two GRAIL spacecraft and LADEE.

For more information on the Beresheet lander, visit:

First Israeli Lander on its way to the Moon

Beresheet Spacecraft: A Failed Lander, but a Major Milestone

For more information on SpaceIL’s continuing effort to land on the Moon, click here.

For the original finding by the LROC team, visit http://lroc.sese.asu.edu/posts/1101