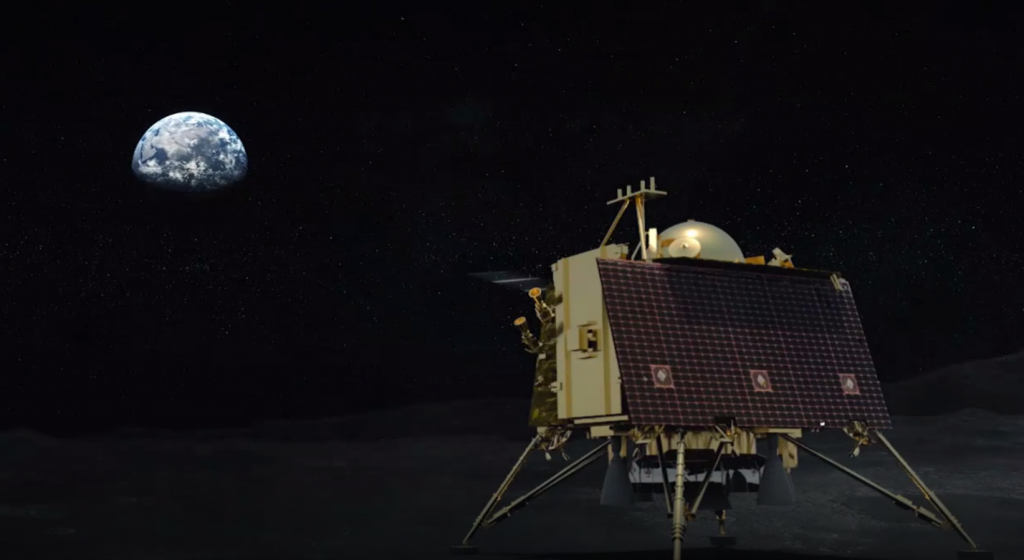 An artist’s rendition of the Vikram lander on the lunar surface. (Image credit: ISRO)

Last week, the Indian Space Research Organisation (ISRO) revealed its plan to send another mission to the Moon. It will be called Chandrayaan-2 and will include an orbiter and India’s first soft lander and rover. The orbiter will have a suite of scientific payloads including a high-resolution camera, a neutral mass spectrometer, a synthetic aperture radar, a near infrared spectrometer, a soft X-ray spectrometer, and a solar X-ray monitor to extend high-resolution visible and compositional mapping of the lunar surface from orbit. The lander, called Vikram in honor of Indian space innovator Vikram Sarabhai, will not only house the rover, but it will also be outfitted with  science payloads including a camera, seismometer, thermal profiler, Langmuir probe, and a laser retroreflector. These instruments will provide information on the current seismicity of the Moon, the temperature and thermal conductivity of the regolith and the near-surface environment. The rover, called Pragyan (“Wisdom” in Sanskrit), will use cameras, an alpha-particle X-ray spectrometer, and laser-induced ablation spectroscopy (LIBS) to analyze the chemical composition of the lunar surface. The mission uses all Indian technology from end to end, with the exception of the NASA-provided retroreflector.

Many of the science instruments on board Chandrayaan-2 are updated versions of instruments that flew on its predecessor Chandrayaan-1. India’s first lunar mission, which launched in October 2008, was an orbiter with an impactor probe. One of the most compelling results from Chandrayaan-1 was the detection of water (OH) on the Moon by both the Moon Mineralogy Mapper (M3), a NASA provided instrument, and ISRO’s Moon Impact Probe (MIP). Contact with the spacecraft was lost in August 2009, putting an end to the science mission, but NASA has since relocated the spacecraft in lunar orbit using ground-based radars. Though it operated at the Moon for less than half of its expected two year lifetime, the mission accomplished approximately 95% of its mission objectives.

On September 6, ISRO plans to land Vikram and Pragyan on a light plains area (~71°S) between Manzinus C and Simpelius N craters. This site, near the Boguslawsky crater, is farther south than any previous lander and currently slated as the landing site for Luna 24 by the Russian space agency  Roscosmos. If successful, Chandrayaan-2 would make India the fourth country to complete a soft landing on the Moon. The mission is scheduled to launch on July 15 at 2:51 a.m. India Standard Time. That’s July 14 at 5:21 p.m. EDT in the U.S.!