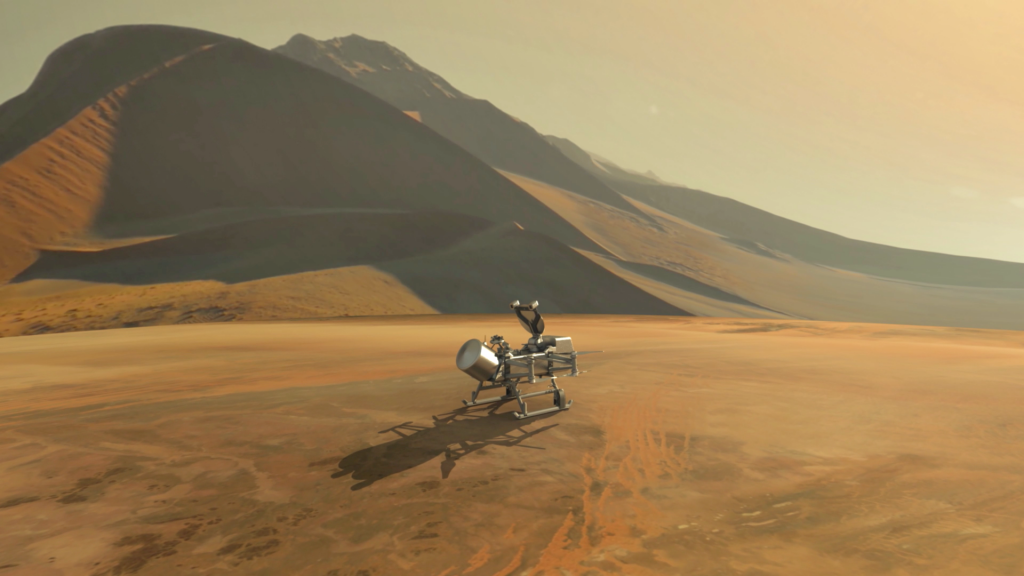 NASA has announced that their next destination in the solar system is Titan, Saturn’s organic-rich moon. The New Frontiers spacecraft mission to Titan, named “Dragonfly,” is a rotorcraft, a drone with eight helicopter-like propellers. It will fly through Titan’s dense atmosphere to sample and examine multiple sites across Titan’s surface. Dragonfly will arrive at Titan in the equatorial “Shangri-La” dune fields, which are similar to the dunes in Namibia. Dragonfly will “flex its wings” to longer and longer flights (with analyses at each landing), eventually reaching the Selk impact crater. There, radar data from the Cassini orbiter suggests that there might have been liquid water and might now be complex organic molecules similar to those needed for life-as-we-know-it. The lander will eventually fly more than 108 miles (175 kilometers) – nearly double the distance traveled to date by all the Mars rovers combined.

Titan is a unique world with rivers, lakes, and even seas of liquid hydrocarbons (ethane and methane) and is the only planetary body in our solar system with a dense atmosphere that is rich in nitrogen and carbon like our own. With one hop per full Titan day (16 Earth days), the rotorcraft of Dragonfly mission will travel from its initial landing site to cover areas several hundred kilometers away during the planned two-year mission, offering a rare opportunity to explore the origins of prebiotic chemistry outside of Earth’s environment. Dragonfly will launch in 2026 and arrive in 2034.