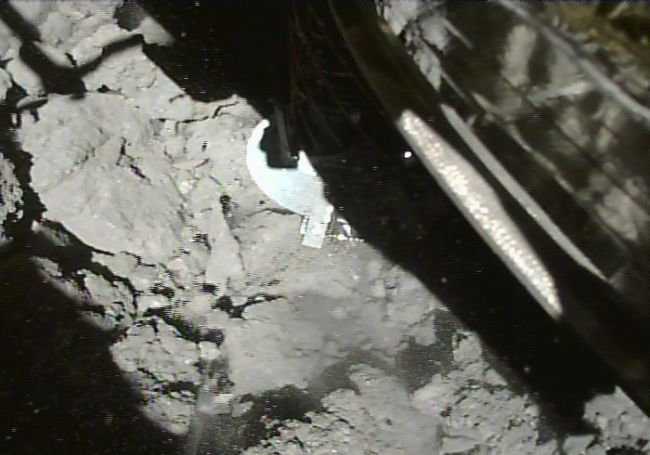 The moment of touchdown as seen from the camera located near the sampling horn on Hayabusa2. Image credit: JAXA

The Japanese spacecraft Hayabusa2 made a second touchdown on July 10 on the asteroid Ryugu. Photos from the spacecraft show views of Ryugu’s surface at touchdown and the nearby rock before and after the sampling itself. The touchdown process involved the spacecraft firing a bullet into the rocky surface. Some of the debris that blasted off from the surface by the bullet ended up in the sampling horn built into Hayabusa2.  Then the spacecraft lifted itself off the surface. The collected subsurface material is particularly intriguing for scientists because it has been protected from the harsh effects of cosmic rays and charged particles of solar wind blasting through space. Hayabusa2 will leave Ryugu at the end of this year and spend about a year making the journey back to Earth with its cargo.