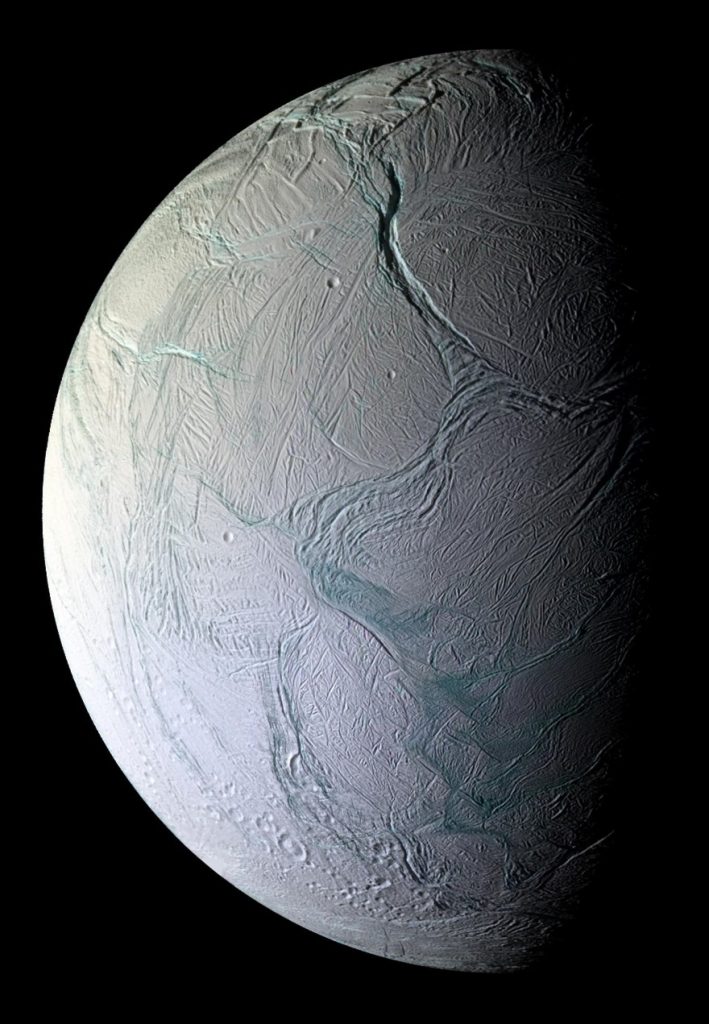 Enceladus, an icy satellite of Saturn, has attracted attention as a target for future missions focused on astrobiology. Its potential as a habitat for life is due to its global subsurface liquid water ocean, active plumes ejecting vapor and ice grains from its south polar region, and the detection of complex organic material in these plumes. The Cassini spacecraft provided evidence that the subsurface ocean on Enceladus is deep, and its ice shell thickness is non-uniform. Based on the previous modeling, the subsurface ocean of Enceladus was considered to be homogenous except for some vertical mixing due to temperature gradients at the ocean-core boundary. However, the possibility of lateral heterogeneity potentially involving dynamic global circulation, hinted at by the non-uniform ice thickness, has not been examined in detail. Spatial heterogeneity in the thickness of the ice shell could be related to localized regions of freezing and melting at the ocean-ice shell interface, where the density of the liquid varies due to the concentration of salts. The spatial heterogeneity of the ice shell then suggests the possibility of density-driven circulation in the subsurface ocean.

To understand these more complex dynamics, Ana Lobo and colleagues from the California Institute of Technology and NASA’s Jet Propulsion Laboratory studied a dynamic ocean model for Enceladus. The model explored freeze-melt cycles at the ocean-ice shell interface, examining the effect of freshwater fluxes and salinity levels on the distribution of density gradients with latitude. They found that in regions of ice formation, pole-to-equator circulation occurs due to density-driven stratification. It has been suggested that regions where the ice is thin, for example, the south pole where the plumes are seen, are where the low-density, low-salinity layers form. Such density differences could sustain both vertical and horizontal stratification within the ocean as well as affect the transport of heat from the core. Because the model indicates that the plumes sample a lower-salinity region, the team suggests that the global ocean of Enceladus may be saltier on average than previously thought. Findings from this research highlight the need for additional detailed studies of interior ocean circulation on Enceladus, as well as other ocean worlds such as Titan and the Galilean satellites of Jupiter, particularly with energy budgets and habitability in mind. READ MORE