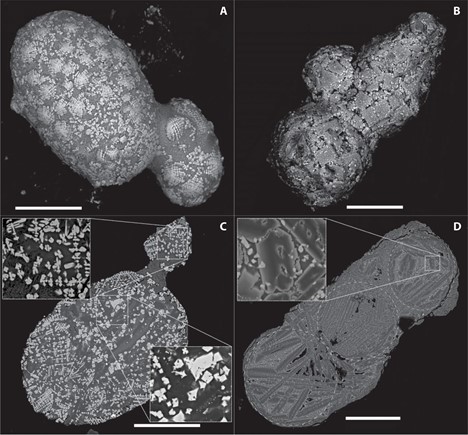 Meteorite impacts on Earth are mostly known for forming recognizable craters such as the Barringer Meteorite Crater in Arizona that are easily distinguished in the geologic record. Large airbursts occur when the impactor is tens to 150 meters in diameter. These smaller impactors are completely fragmented and vaporized during atmospheric entry, but they are still large enough to generate a low-altitude explosion (airburst), similar to what occurred in the Tunguska and Chelyabinsk events over Russia in 1908 and 2013, respectively. Airburst events have been documented through eyewitness accounts, infrasound, seismometers, and video cameras, and also studied via numerical modeling, showing that these events are orders of magnitude more frequent than the impact events that form craters like Barringer. Due to the frequency of airburst events, they are an important factor in determining the impact history of Earth and the future impact hazard. However, as the impactor is fragmented and vaporized, these large airburst events are much more difficult to identify in the geologic record.

Matthias Van Ginneken from the Belgium Geological Survey and collaborators traveled to Walnumfjellet, Antarctica, and found 17 conspicuous spherules. They interpret the spherules as having condensed in an impact-generated vapor plume, indicating that an airburst larger than the Tunguska event occurred over Walnumfjellet. These spherules have compositions that are within the range of primitive meteorites (chondrites), and the high nickel content in their olivine grains distinguishes them from terrestrial rocks. The similar mineral, chemical, and oxygen-isotope characteristics of the Walnumfjellet spherules to those found in meteoritic dust layers in ice cores collected elsewhere across Antarctica suggest that these particles document the same major meteoritic event that occurred some 430,000 years ago. The lack of a crater structure on the Antarctic ice sheet, the unusual oxygen-isotope composition of the spherules, and their wide regional distribution suggest that the impactor that formed the Walnumfjellet spherules did not impact the ground and instead generated a superheated vapor jet that vaporized the ice. As the vaporized ice and impactor melt droplets cooled, an impact plume formed, distributing the spherules across Antarctica. Numerical modeling of this impact scenario suggests that if a similar airburst event occurred over a densely populated area today, there would be millions of casualties and severe damage over hundreds of kilometers, showing that it is critical to understand this type of impact event in relation to the hazards posed by asteroids. READ MORE