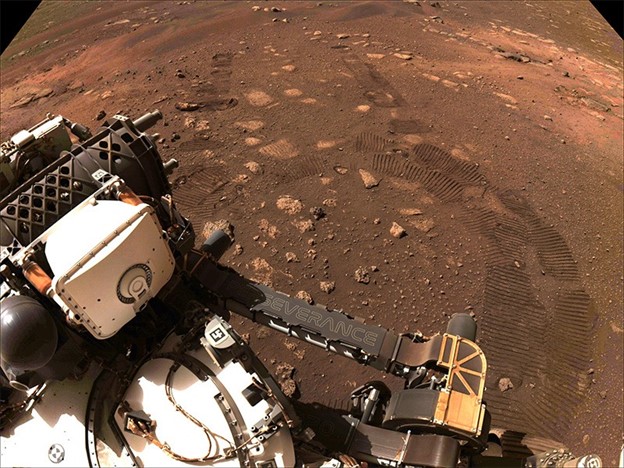 Image of the Perseverance rover on its first drive on martian soil on March 4, 2021. Credit: NASA/JPL-Caltech.

Although present-day Mars is arid and dry, there is geologic evidence that ancient Mars had a significant volume of liquid water, equivalent to a global ocean 100–1500 meters deep. This evidence includes geomorphic features such as river valley networks, deltas, ancient lake beds, and gullies. Martian rocks also show the presence of hydrated clay minerals and sulfates that suggest the presence of water on early Mars. How Mars evolved to be such a dry planet today, though, remains a mystery. Because Mars has such a thin atmosphere, loss of hydrogen by atmospheric escape has been thought to explain how Mars lost its water; in fact, atmospheric escape of water has been observed by NASA’s Mars Atmosphere and Volatile EvolutioN (MAVEN) mission. However, based on these observations and previous modeling, atmospheric escape alone cannot account either for the complete mass of water lost or the hydrogen isotopic composition of present-day Mars. This suggests Mars may contain an unseen reservoir storing ocean-scale volumes of water.

A recent study led by Eva Scheller of the California Institute of Technology developed a model for the martian water budget, including the effects of volcanic degassing, atmospheric escape, and crustal hydration (sequestration of water in hydrated minerals). This work demonstrates that the reaction of water with rocks to form hydrated minerals such as clays can account for 30–90% of the missing martian water and can also explain the observed hydrogen isotopic composition. This process of crustal hydration is common on Earth. However, on Earth, plate tectonics recycles this water back into reservoirs on the surface and into the atmosphere. In contrast, the absence of plate tectonics on Mars results in irreversible “loss” of the water by locking it into the martian crust. This crustal hydration model has testable predictions, such as a significant increase in deuterium-to-hydrogen (D/H) isotopic ratio during the earliest times on Mars and a relatively constant D/H ratio for the last three billion years. The model also predicts a short-term cyclic change in the D/H ratio during the warmer and cooler seasons on Mars. NASA’s Mars 2020 rover, Perseverance, landed on Mars on February 18, 2021, with one of its goals being the identification of resources such as subsurface water. The models presented by Scheller and colleagues are directly testable by martian exploration missions such as Perseverance by analyzing the water contents and D/H ratios of martian samples. READ MORE