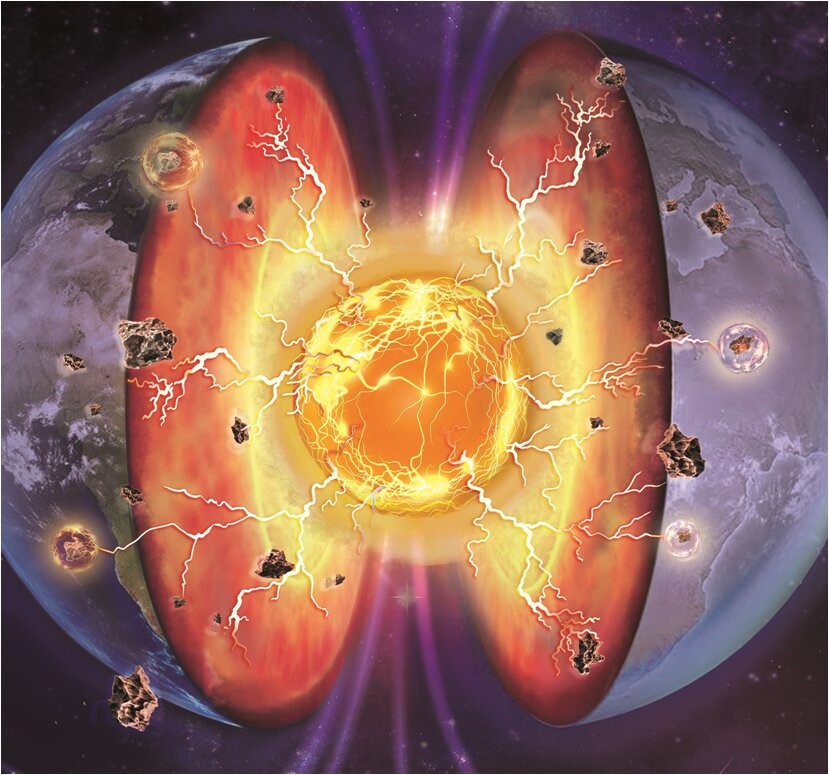 Superionic water ice is an extreme phase that forms when water ice is in high-pressure and high-temperature environments. In this phase, water molecules break apart, and hydrogen ions (protons) can migrate through the oxygen lattice and become highly conductive, as in metals. Superionic water ice is suspected of shaping the interior structures and affecting the magnetic fields of the giant ice planets Uranus and Neptune. Inside Earth, however, water is mainly incorporated into hydrous minerals rather than water ice. Hydrous minerals, especially if they are in the superionic state, play an important role in the deep interior of Earth, controlling thermal and electrical conductivity, magnetism, redox processes, hydrogen circulation, and isotope partitioning.

An international group led by Mingqiang Hou at the Center for High Pressure Science and Technology Advanced Research (China) used a combination of high-pressure and high-temperature experiments, Raman spectroscopy, and first-principles simulations to investigate a form of pyrite-type iron oxide-hydroxide, which is a candidate hydrogen-bearing phase near the core-mantle boundary. Using Raman spectroscopy, which is sensitive to hydrogen binding interactions, they found that the oxygen-hydrogen (O-H) bond of this iron-bearing hydrous mineral weakens abruptly above 73 GPa and 1700°C. These results suggest that hydrogen ions (protons) become diffused in the solid iron and oxygen lattice under high pressure and temperature. The observation of increased electrical conductivity at this point indicated a transition to the superionic state. The highly diffusive hydrogen in this superionic state could provide mechanisms for the transport of charge and mass in the deep mantle of Earth. This discovery will promote extensive research into the mineral physics of exotic superionic phases of hydrous minerals and provide a new view of geophysics and geochemistry of Earth’s interior. READ MORE