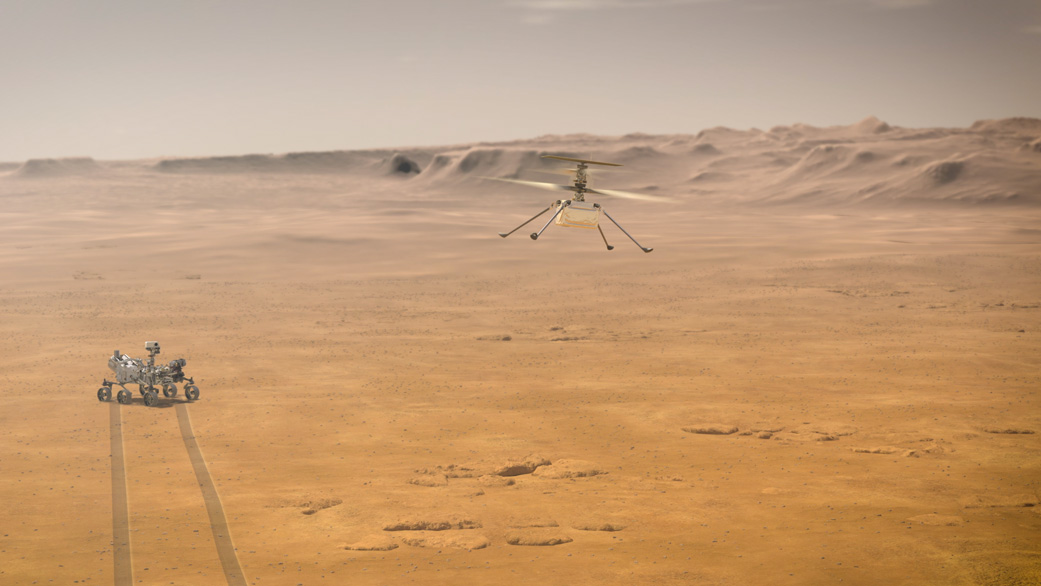 When NASA’s Ingenuity Mars Helicopter attempts its first test flight on the Red Planet, the agency’s Mars 2020 Perseverance rover will be close by, as seen in this artist’s concept. Credit:  NASA/JPL-Caltech.

One of the most exciting components of the Mars 2020 mission is the Mars helicopter scout named “Ingenuity.” Ingenuity is a technology demonstration intended to test whether an aircraft can achieve controlled flight in the cold, low-pressure, dusty environment of Mars. Ingenuity is equipped with carbon-fiber blades that rotate at very high speeds (2400 rpm) to produce the lift necessary for flight in the thin martian atmosphere. Following a short test last week, in which the Ingenuity team concluded that reinstallation of flight control software was needed, the helicopter made its first successful flight early on April 19, hovering about 10 feet (3 meters) in the air for 30 seconds. This demonstration will have major implications for the technologies needed for future robotic flying vehicles on other worlds.

Although Ingenuity is not equipped with scientific instrumentation, scientists and engineers speculate how the rotorcraft will interact with the martian environment and what can be learned from such interactions. A recent study led by William Farrell at NASA Goddard Space Flight Center examined the possibility that electric charge would build up on Ingenuity during flight. This is a well-known phenomenon on Earth, where helicopter blades collide with and interact with particulates suspended in the atmosphere (e.g., snow or sand), effectively charging the helicopter, but it is unknown how the conditions on Mars would affect such interactions. Charge buildup and its discharge can be an engineering concern, but it could also provide information about the electric properties of martian materials. Farrell and colleagues conducted laboratory experiments and created models to simulate the conditions on Mars when Ingenuity takes flight.

The study found that electric charges can be induced through interactions between martian dust and Ingenuity’s rotor blades, especially during takeoff and landing. They concluded that the charge buildup and resulting electric field are not strong enough to damage Ingenuity but could result in the local breakdown of surrounding carbon dioxide molecules in the atmosphere. This breakdown could result in a “corona-like glow” that might be detectable by the Perseverance rover. They suggested that at least one attempt should be made to fly Ingenuity at twilight to maximize the possibility of making this observation and recommend that future missions consider equipping aircraft like Ingenuity with electrometers and radio frequency discharge-sensing devices in order to better study atmospheric electricity on Mars. READ MORE