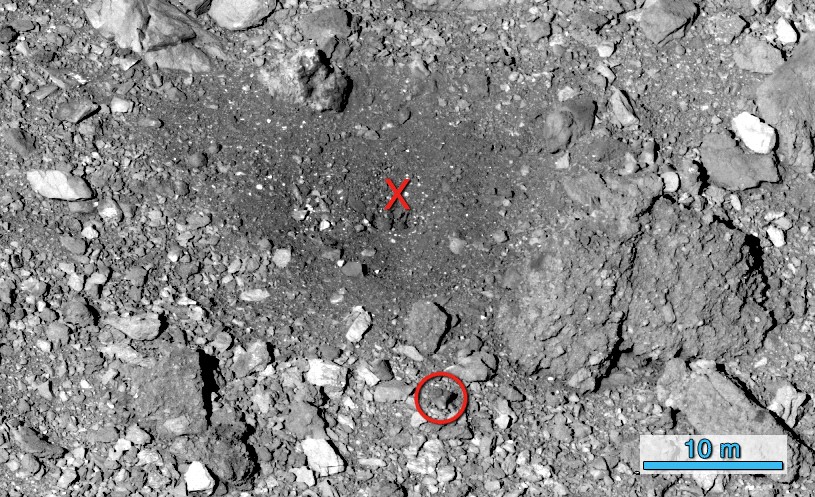 The Nightingale site on asteroid Bennu sampled by the OSIRIS-REx spacecraft, where X marks the sampling site, and the circled rock was displaced several meters by the sampling process. Credit:  NASA/Goddard/University of Arizona.

Two spacecraft have recently ventured to near-Earth asteroids to collect samples and return them to Earth for hands-on study: JAXA’s Hayabusa2 to Ryugu and NASA’s Origins, Spectral Interpretation, Resource Identification, Security, Regolith Explorer (OSIRIS-REx) to Bennu. Hayabusa2 returned its samples to Earth last December, and JAXA has begun cataloging and studying its bounty. OSIRIS-REx has studied Bennu since late 2018 and completed a successful sample collection on October 20, 2020. After backing away from the surface of Bennu on April 7, OSIRIS-REx made a close flyby at less than 3.7 kilometers over the sampling site named Nightingale to examine how the sampling maneuver had disrupted the surface.

While the Hayabusa2 spacecraft used a projectile to disturb the surface of Ryugu and collect the ejecta from the crater, OSIRIS-REx used a different approach. The spacecraft extended its Touch-and-Go Sample Acquisition Mechanism (TAGSAM), a 3.4-meter boom with a 30-centimeter circular sampling head, and descended to contact the surface of Bennu. Once in contact, the sampling head expelled nitrogen gas to fluidize the surface material and collect its sample. Five seconds later, thrusters lifted the spacecraft safely away from the surface. The OSIRIS-REx team reports that the sampling head sank 49 centimeters below the surface and may have collected more than a kilogram of material. In the process of sampling, the Nightingale site was disrupted by the TAGSAM penetrating the surface, the expulsion of the nitrogen gas, and the thruster exhaust during the post-sampling maneuver.

The recent flyby over Nightingale revealed a depression at the sampling site with previously unseen boulders unveiled by the dispersal (and collection) of smaller particles, a “campfire ring-like shape” formed by <1-meter-wide boulders moved by the thruster exhaust, and even a 1.25-meter-wide boulder that had been displaced 12 meters across the site. Studying these images of the post-sampling environment, along with the dynamics of the sampling itself and, of course, the material returned to Earth will help scientists better understand the chemical properties, strength, and structure of materials on Bennu and other near-Earth asteroids. OSIRIS-REx will leave Bennu for good in May to make its two-year journey back to Earth. In September 2023, it will drop off its sample and then possibly continue on an extended mission. READ MORE