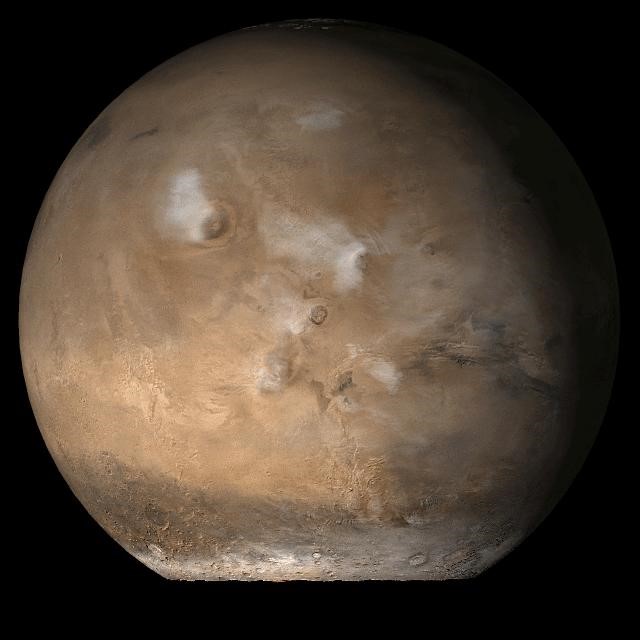 High, wispy clouds similar to cirrus clouds on Earth could have warmed parts of Mars enough to support surface water early in its history, according to a University of Chicago study. Credit:  NASA/JPL/Malin Space Science Systems.

The surface of Mars shows abundant geologic evidence that lakes, rivers, and other bodies of water existed on its surface, at least intermittently, for significant portions of its history. However, scientists have struggled to explain how Mars could ever have been warm enough to support liquid water. Mars only receives 30% as much sunlight as Earth, so a greenhouse effect from water and carbon dioxide in the atmosphere is required to warm its surface. Previous models of the formation of high-altitude clouds that would provide the strongest greenhouse effect on Mars show that they would only persist for a few years, not enough to sustain warming. A new study led by Edwin Kite of the University of Chicago suggests a method by which high-altitude clouds could have persisted long enough to sustain liquid surface water, at least for part of martian history.

The impetus for the study was the observation that previous climate models of Mars had assumed relatively extensive water ice spread across the surface. This creates a humid environment at low altitudes, resulting in cloud formation that tends to cool the surface. However, the new modeling by Kite and colleagues showed that if surface water ice is only sparsely distributed, the humidity is lower, and moisture has to rise to higher altitudes to form clouds. It is these persistent high-altitude clouds that provide the most effective greenhouse warming. At high latitudes, ice collects in cold traps, whereas at low latitudes, high-altitude clouds develop to create a warm and arid environment. These low-latitude warm zones would reach temperatures above the melting point of water ice, allowing lakes fed by groundwater or ice melt to exist on the surface. Exploring how this climate dynamic was lost could provide insight into how Mars reached its current cold and dry state. READ MORE