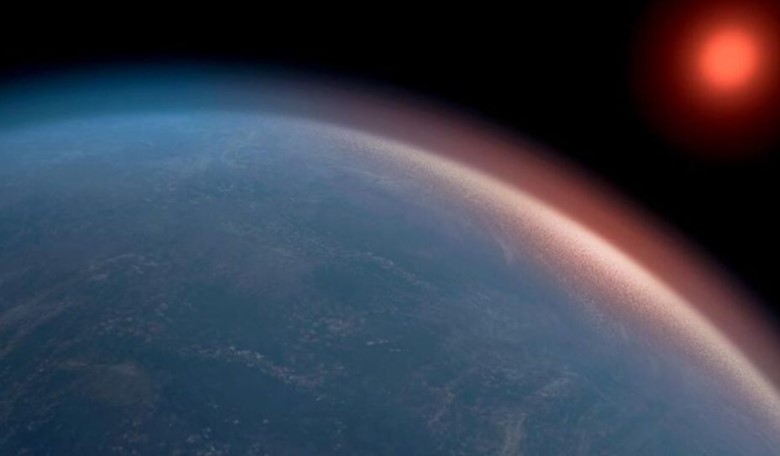 An artist’s impression showing a rocky exoplanet with a cloudy atmosphere. Credit:  ESA.

To date, more than 4,000 exoplanets have been confirmed, with thousands more possible exoplanet detections. The physical properties and chemical compositions of these planets are important for understanding how planets form and whether they can support life. For example, the composition of an exoplanet’s atmosphere, which can be studied spectroscopically when the exoplanet passes in front of its host star, can provide insights into the chemical composition of the planet, as well as processes on its surface.

Thermodynamic models have been developed to explain the formation and evolution of planetary atmospheres. However, there are limited experimental data available to constrain such models. To understand how primary planetary atmospheres form during planet formation and how their compositions correlate with bulk planetary compositions, Maggie Thompson at the University of California Santa Cruz and colleagues performed degassing experiments on primitive meteorites. The research team selected three carbonaceous chondrites:  Murchison, Jbilet Winselwan, and Aguas Zarcas. A sample of each of these meteorites was heated to 1200°C, and then abundances of ten major gas species were measured by mass spectrometer as they were released from the rocks. For all three samples, water was the most abundant outgassing species (66%), followed by carbon monoxide (18%) and carbon dioxide (15%). Small amounts (1% or less) of molecular hydrogen and hydrogen sulfide were also observed. These experiments suggest that if terrestrial planets formed from carbonaceous chondrite-like materials, their primary atmospheres (if retained) would be water-rich. Planetary atmospheres around rocky planets in our solar system show various chemical compositions, not all of them water-rich. This suggests they lost the original atmospheres that formed during the degassing of their interiors, and subsequently acquired secondary atmospheres by different processes. READ MORE