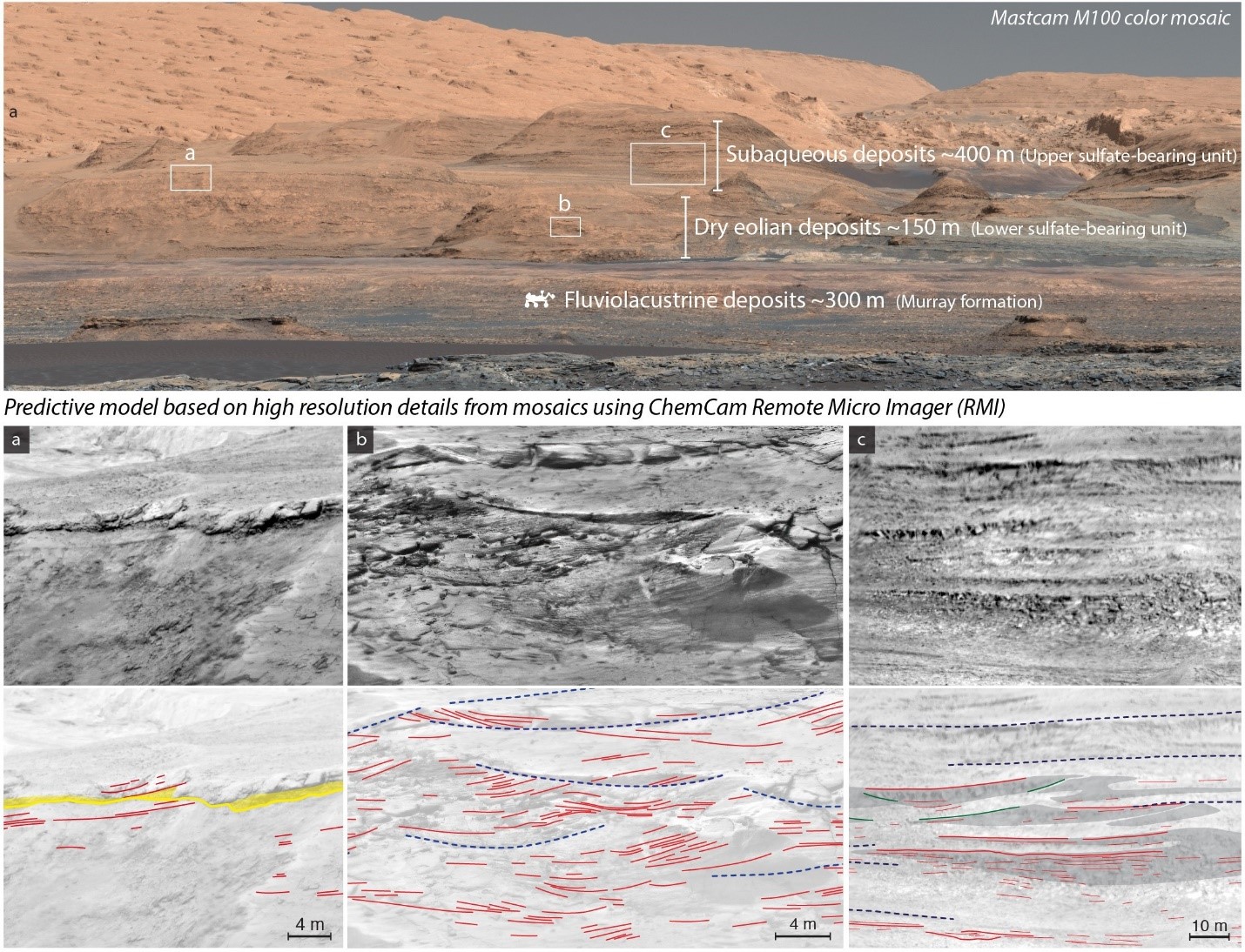 View of Mount Sharp, Mars, with buttes showing the main stratigraphy of the sulfate-bearing unit to be explored by the Curiosity rover and expected ancient environments based on observed sedimentary structures. Credit:  Rapin et al., Geology.

The Mars Science Laboratory rover, Curiosity, landed in 2012 and continues to explore Gale Crater, seeking to identify and characterize past habitable environments on Mars. Gale Crater preserves a 5-kilometer-thick sequence of stratified rocks in a partially eroded mound called Mount Sharp, which displays an extended record of early martian climate history. Currently, Curiosity is exploring the base of Mount Sharp, where rocks that formed during the Hesperian time period (3.61 billion years ago) transition from clay-bearing lake deposits to a thicker sulfate-bearing unit. One of the main objectives of Curiosity is to investigate this change in mineralogy, which has been interpreted as reflecting a major change in the environment on Mars.

An international research team led by William Rapin of the Université de Toulouse (France) has reported the first detailed description of bedding structures and key mineral assemblages in the sulfate-bearing unit, obtained using the Remote Micro-Imager (RMI) of the ChemCam instrument on Curiosity. The ChemCam RMI can provide high-resolution images from distances up to several kilometers away and was used in this work to obtain the finest resolution images to date of the sedimentary structures of Mount Sharp. These images show lake-deposited clays at the base of Mount Sharp below the crossbedding of sulfate-bearing layers indicative of wind-formed, aeolian dunes deposited during dry climate conditions. Above the cross-bedded units, alternating layers of eroded and resistant material are composed of sandstones and conglomerates with intermixed mudstones. These sequences are interpreted as fluvial deposits, suggesting the return of wet conditions. The overall structure of Gale Crater’s Hesperian stratigraphy indicates that the martian climate alternated between wet and dry environments several times before it became permanently dry. Future plans for Curiosity include investigating the various stratigraphic layers found in the foothills of Mount Sharp up close to better understand how the ancient martian climate evolved. READ MORE