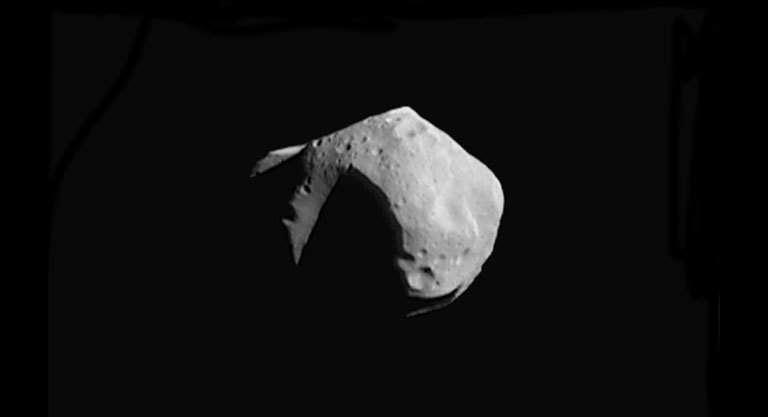 A porous asteroid 253 Mathilde captured by the Near Earth Asteroid Rendevous (NEAR) spacecraft. Credit:  NASA/JPL.

Asteroids are small, rocky bodies that can provide clues to the primitive composition of our solar system and how organic material was delivered to Earth. Many of the most primitive asteroids, as represented by primitive meteorites, experienced early heating that led to aqueous alteration of their primary materials. This process is largely thought to be driven by heating from the decay of radioactive elements in asteroid parent bodies. This internal heating can cause hydrothermal reactions between the water-ice and the rock matrix, including the possible formation of organic solids through formose condensation. It has been suggested that heat generated by impacts could also lead to aqueous alteration, particularly in surface areas that would not have been sufficiently heated by radioactive decay in the interior of the asteroid.

To address whether heating generated during impacts can also lead to alteration and precipitation of organic material, Minami Yasui and colleagues from Kobe University in Japan conducted a series of high-velocity impact experiments on a porous substrate. During these experiments, they monitored the temperature of the target material and found that the temperatures are highest at the point of impact and decrease with increasing distance. Numerical modeling showed that on asteroids located within two astronomical units from the Sun, aqueous alteration requiring temperatures of 50° to 150°C could occur due to heating beneath impact craters larger than 20 kilometers in radius. The formation of some organic materials at temperatures above 0°C could occur beneath craters as small as 1 kilometer in radius. It was also found that primordial organic materials that formed before planetesimal accretion and were already present on the asteroids might be destroyed during impact heating, leading to the question of what the balance between forming and destroying organic material on asteroid surfaces might be. READ MORE