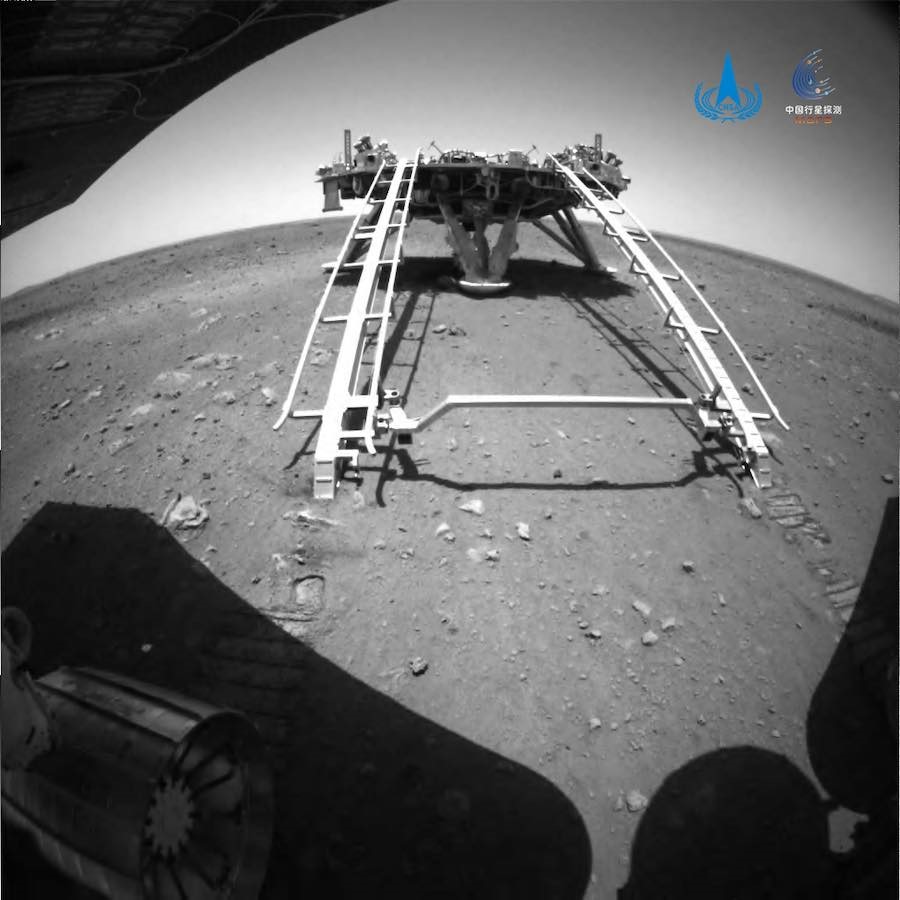 The Zhurong rover looks back as it drives onto the martian surface to investigate Mars’ ancient geology. Credit:  CNSA.

May 14, 2021, marked a historic day for the Chinese Space Agency as their Zhurong landing platform and rover safely touched down on the surface of Mars. Zhurong, named after a Chinese fire god, is a part of the ambitious Tianwen-1 Mars mission, which includes an orbiter that released the lander and rover. Upon entering the martian atmosphere, Zhurong was protected by an aeroshell and heatshield, plus a parachute to help slow down the spacecraft from its initial entry speed of 4 kilometers per second. Once the spacecraft had sufficiently slowed, the heatshield was detached, and rockets with variable thrust were used for further deceleration. Prior to landing, the spacecraft used a laser range finder and microwave sensor to locate itself relative to the martian surface, accurately measure its descent speed, and make course corrections as needed. The entire process of entry, descent, and landing was completed autonomously. The Zhurong landing platform touched down in Utopia Planitia, the largest recognized impact basin on the Red Planet with a diameter of 3,300 kilometers.

The Zhurong rover, which is solar-powered, drove off the landing platform on May 21, securing China’s place as the second nation to successfully land and operate a rover on the surface of Mars. The rover has six scientific instruments:  a multispectral camera and two navigation cameras, wind and sound detectors, temperature and pressure sensors, a magnetometer, a laser-induced breakdown spectrometer to measure chemical compositions, and a ground-penetrating radar, which will relay their findings to Earth via the Tianwen-1 orbiter. The Zhurong rover will investigate the geology on the surface and subsurface of the Utopia Planitia basin, in addition to searching for evidence of permafrost situated beneath the surface. Zhurong is proving to be an exciting addition to the Mars exploration family. READ MORE