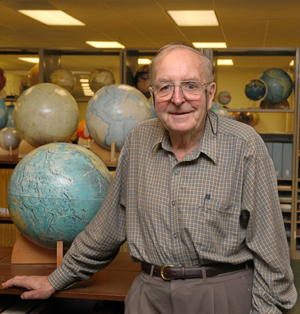 Stuart Ross Taylor, one of the founding fathers of planetary science, passed away on May 23, 2021, in Canberra, Australia. Taylor served as the first visiting scientist at the Lunar and Planetary Institute (LPI) (then the Lunar Science Institute) in 1969 and returned to the Institute many times over the subsequent decades. Taylor used many of these periods of residency at the Institute to write some of his most renowned publications, including the books Planetary Science:  A Lunar Perspective and Solar System Evolution:  A New Perspective.

Taylor was involved in the study of lunar samples from the first sample return in July 1969. He was a member of the Preliminary Examination Team at NASA’s Johnson Space Center in Houston, Texas, and carried out the first analysis of the first lunar sample returned to Earth. Subsequently, as a NASA principal investigator for 20 years, he worked on lunar composition, evolution, and origin models.

Taylor grew up on a farm in New Zealand. He earned both Master’s and Bachelor’s degrees in chemistry and geology at the University of New Zealand before completing his Ph.D. in geochemistry at Indiana University with Brian Mason. He lectured at the Universities of Oxford and Cape Town before moving to the Research School of Earth Sciences at the Australian National University, where he was an emeritus professor.

Taylor worked on the composition and evolution of the Moon, the continental crust, tektites and impact glasses, island arc rocks, and many other topics involving trace element geochemistry. He published 240 papers in scientific journals and nine books.