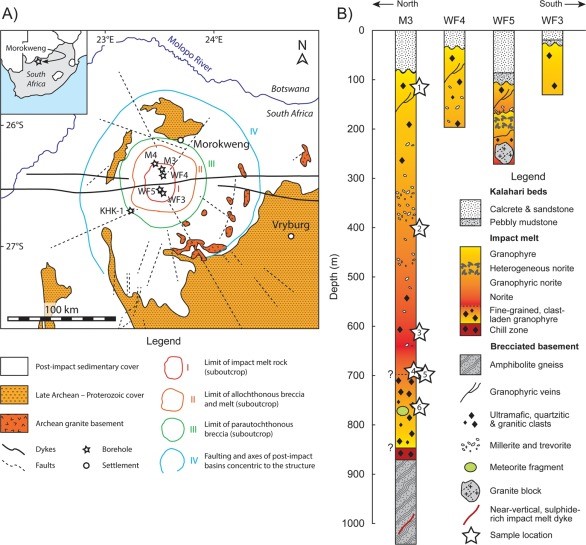 Impact cratering is a ubiquitous geologic process in the solar system. This has important implications for planetary habitability because of the role of impacts in mass extinction events on Earth. Impacts have also had a significant influence on the thermal evolution of planetary crusts. To fully understand the role of impact cratering in solar system processes, particularly its effects on habitability, it is important to determine the ages of large impact events and the rates at which impact-generated melts cool.

A recent study, led by Gavin Kenny of the Swedish Museum of Natural History, reported the age of the Morokweng impact structure in South Africa. This impact structure is approximately 80 kilometers in diameter and contains impact melt rocks that formed and cooled immediately after the impact. Kenny and colleagues collected six samples from a borehole drilled into the impact-melt stratigraphy. Using the uranium-lead radioisotopic decay system and precisely measuring the uranium and lead contents of the mineral zircon, the team determined that the impact occurred 146 million years ago. This age is a few million years older than a minor extinction event at the Jurassic-Cretaceous (J-K) boundary estimated to have occurred 140 to 145 million years ago. They also constructed a thermal model to determine how quickly the melt generated at the time of impact cooled and solidified. According to their models, it took between 11,000 and 35,000 years for all the melt generated in the Morokweng impact structure to cool and solidify. Such rapid (on geologic time scales) cooling rates imply that the age of 146 million years precisely dates the impact event. The authors propose that if the Morokweng impact played a role in the J-K extinction event, evidence of it could be found in late-Jurassic-age (Tithonian) rocks. READ MORE