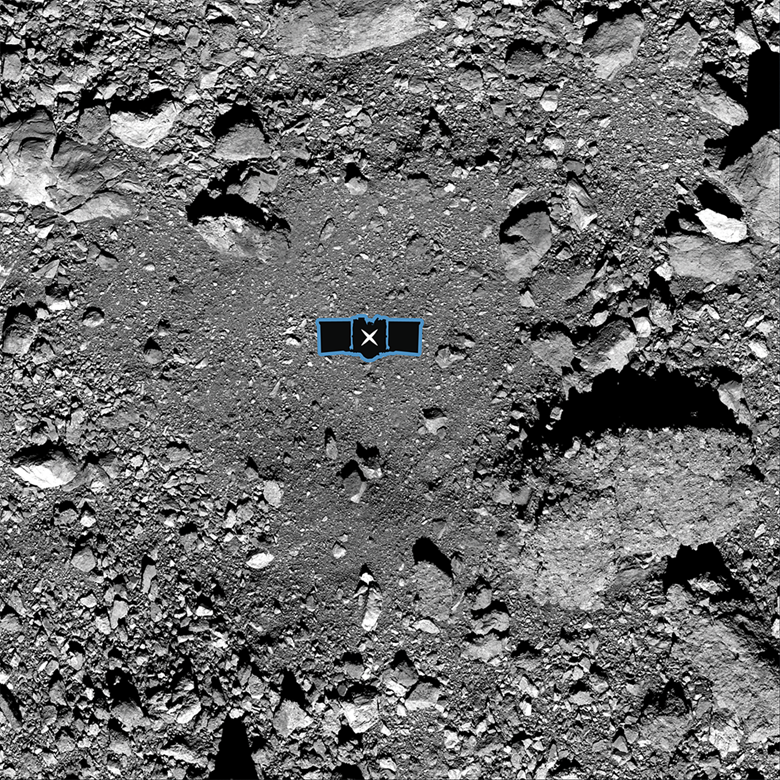 This image shows sample site Nightingale Crater, OSIRIS-REx’s primary sample collection site on asteroid Bennu. The image is overlaid with a graphic of the OSIRIS-REx spacecraft to illustrate the scale of the site.
Credit:  NASA/Goddard/University of Arizona.

Sample return missions, such as Hayabusa2, which recently returned samples to Earth, and OSIRIS-REx, which is expected to return samples in 2023, are important and highly anticipated for planetary scientists. Sample returns offer the opportunity to study uncontaminated planetary material using high-precision techniques in terrestrial laboratories. However, the amount of material expected to be returned by such missions is small. Analyses on such limited samples have to be carefully planned by assessing the quality and value that a dataset provides versus the loss of sample during the analysis.

To test the most appropriate techniques to apply to sample return analyses, a recent study led by Tak Kunihiro of Okayama University performed several compositional analyses using mass spectrometry techniques on carbonaceous chondrite meteorite, Allende CV3. Carbonaceous chondrites like Allende CV3 contain primitive solar system materials that will likely be similar to those included in the Hayabusa2 and OSIRIS-REx samples. Their composition can inform scientists about the composition of the early solar system.

The study compared the results from laser ablation inductively coupled plasma mass spectrometry (LA-ICP-MS) and secondary ion mass spectrometry (SIMS) for measuring bulk elemental concentrations. It concluded that while SIMS proved to be a more sensitive technique, LA-ICP-MS yielded higher precision for elemental analyses. The study then used the data to evaluate the origin of an igneous rim around one of the chondrules in Allende. They concluded that the rim could have formed in the early solar system as a result of melting and gas-rock interactions. Alternatively, it could have formed during a collision between the chondrule and a pre-existing planetesimal that was in the early stages of differentiation. This study illustrates the type of information about early solar system processes that can be gained by studying the returned Hayabusa2 and OSIRIS-REx samples. READ MORE