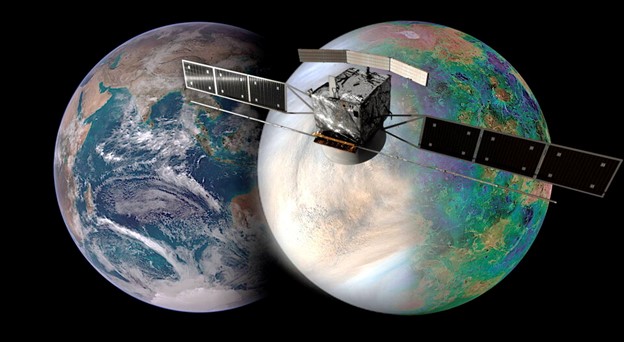 ESA’s EnVision mission plans to explore why Venus is so different from Earth.
Credit:   NASA/JAXA/ISAS/DARTS/Damia Bouic/VR2Planets.

Following the announcement that NASA will send two missions to explore Venus, the European Space Agency (ESA) announced its selection of a Venus orbiter mission called EnVision to focus on why Venus is so different from Earth. Despite its similar size and composition to Earth, Venus exhibits drastically different surface and atmospheric conditions. Its surface has temperatures of about 425°C and an atmospheric pressure similar to that of water a kilometer deep under Earth’s oceans. Furthermore, the atmosphere of Venus contains toxic sulphuric acid and has undergone a catastrophic greenhouse effect.

EnVision, ESA’s fifth medium-class mission, has a targeted launch in the early 2030s and will characterize the interior, surface, and atmospheric properties of Venus to understand how these systems interact with each other. The mission includes two radar instruments:  a synthetic aperture radar provided by NASA to image the surface of Venus through its thick atmosphere and a ground-penetrating radar sounder to map the subsurface. Spectrometers for analyzing the composition of the atmosphere and surface will detect any changes in the abundance of elements that may indicate active volcanism on Venus. EnVision will also contain a radio science experiment to study Venus’ internal structure and gravity field.

Previous missions to Venus include NASA’s Magellan mission (1989–1994) that mapped the surface of Venus using a synthetic aperture radar and measured its gravitational field, ESA’s Venus Express (2005–2014) that primarily studied Venus’ atmospheric composition, and the Japan Aerospace Exploration Agency’s Akatsuki mission that launched in 2015 and is actively studying Venus’ atmosphere. The combined, complementary efforts of future NASA-led missions DAVINCI (Deep Atmosphere Venus Investigation of Noble gases, Chemistry, and Imaging) and VERITAS (Venus Emissivity, Radio Science, InSAR, Topography, and Spectroscopy), and ESA-led mission EnVision, will provide a more comprehensive understanding of Venus over the next decade and beyond. READ MORE