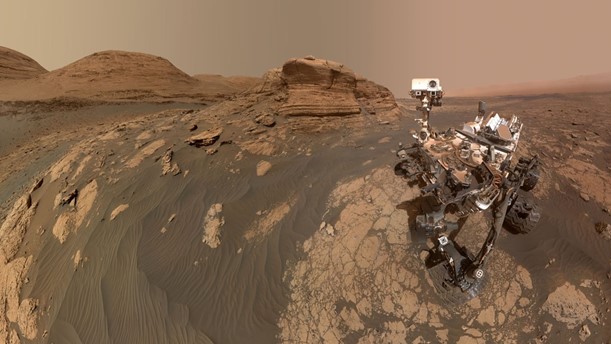 The presence of methane (CH4) in the martian atmosphere is of great interest because methane is a potential biosignature. Over the last two decades, trace amounts of methane on Mars have been detected using instruments on Earth and Mars such as the Canada-France-Hawaii Telescope (CFHT), the NASA InfraRed Telescope Facility (IRTF), NASA’s Curiosity rover, and the European Space Agency’s Mars Express spacecraft. However, the amounts of methane detected by different instruments at different times have varied widely, ranging from undetectable to 45 parts per billion by volume (ppbv). Despite the importance of methane, its distribution, behavior, and origin on Mars remain a mystery.

An international research team led by Christopher Webster of NASA’s Jet Propulsion Laboratory reported measurements of atmospheric methane in Gale Crater using the Curiosity rover’s Tunable Laser Spectrometer (TLS) in the Sample Analysis at Mars (SAM) suite of instruments. The TLS-SAM measured an average value of 0.52 ppbv of atmospheric methane at night, while no methane was detected during the daytime. The observed differences in methane concentration from day to night support the hypothesis that methane is associated with a source near the surface, most likely from seepage of gas migrating upward along faults and fractures. Concentrations of methane would be enriched during the night due to limited atmospheric mixing and horizontal transport and would be reduced during the day due to increased atmospheric mixing resulting in the advection of methane from the crater. The study also suggests that near-surface production of methane is unlikely to be specific to Gale Crater and may be occurring globally. If this is the case, some mechanism must destroy or sequester the released methane. Further experiments using the TLS-SAM instrument will help investigate such mechanisms as a first step toward determining whether methane on Mars is biogenic in origin. READ MORE