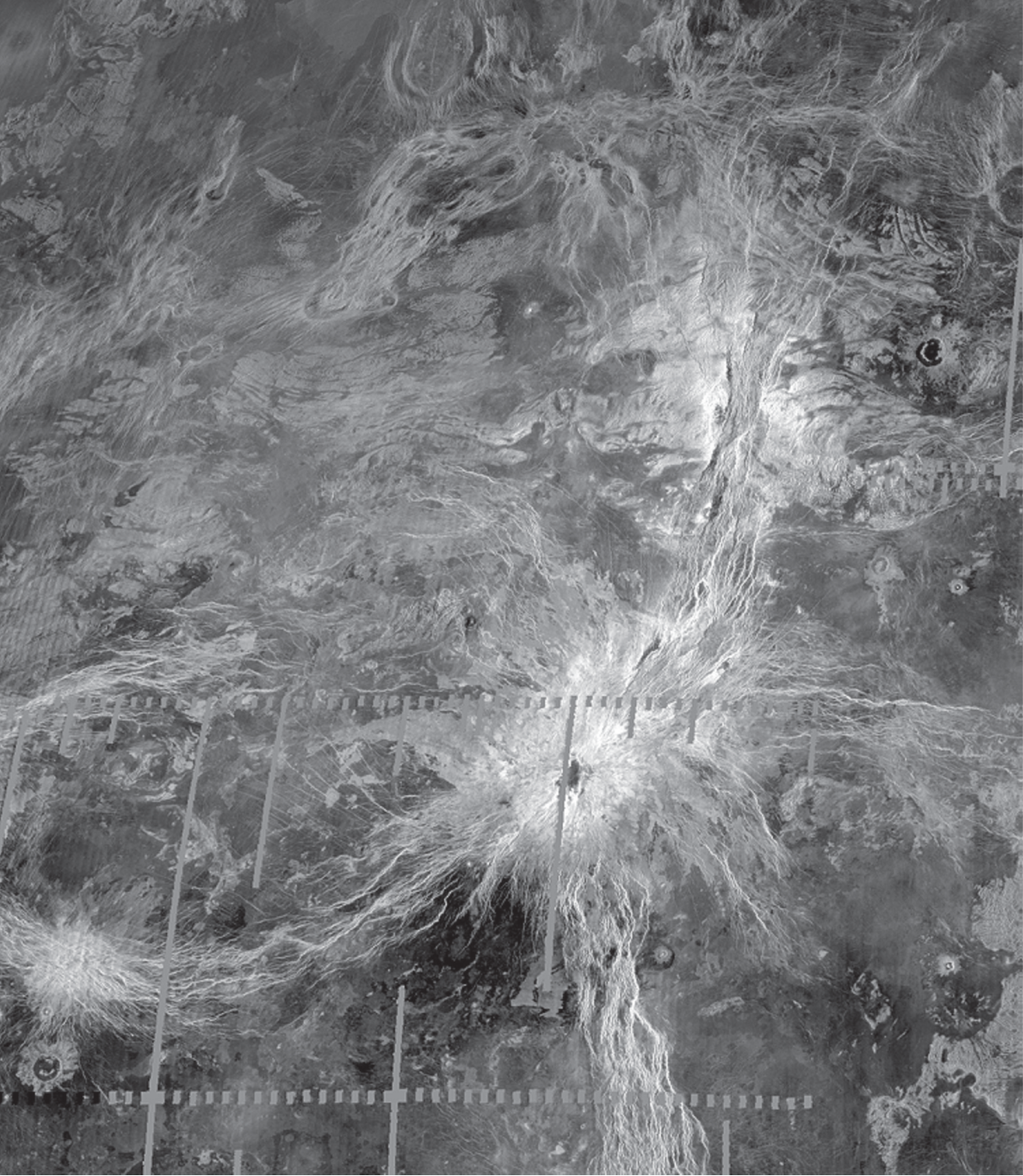 Magellan radar image of the Beta Regio on Venus. Specific features in this image include the volcanoes Theia Mons (large bright feature at the center bottom) and Rhea Mons (smaller bright feature at the upper right), along with the associated Devana Chasma. Devana Chasma is a large rift feature that splits the volcano Rhea Mons and continues to the south. North is to the top of the image. Image number C3-14N300. Credit: NASA Goddard Space Flight Center.

Venus is a volcanological wonderland that has some of the largest volcanoes in the solar system. However, there are many unanswered questions and numerous debates about these volcanoes, including what are the specific ages of different volcanoes and associated lava flows, does the volcanic activity on Venus happen gradually or catastrophically, and what is the composition and water content of Venus lava flows. Over the next decade, NASA and the European Space Agency will be sending orbiter missions (VERITAS and EnVision) and an atmospheric probe (DAVINCI) to image the surface with high-resolution radar, measure compositional and mineralogical properties from emissivity, and determine the chemistry and structure of the atmosphere.

In preparation for a decade of Venus exploration, Piero D’Incecco of Università d’Annunzio (Italy) and colleagues studied the young volcanoes on Venus and argued that they should be specifically targeted for future investigation. This new work combined previous orbital remote sensing data and previously published laboratory experimental data and geophysical modeling to propose young volcanic rises as potential target sites for future orbital and in situ investigations. Young volcanic rises are thought to be supported by active mantle plumes. Many of these young volcanic rises are also thought to be tectonically active, with the volcanism and tectonism being potentially related. Such sites could, therefore, provide information about active geological and atmospheric processes on Venus. D’Incecco and his team showed that studying these regions will elucidate the rate and specific styles of volcanic and tectonic activity on Venus and could therefore constrain some of the first-order questions about the geologic history of Venus, including whether Venus has gone through catastrophic or more gradual resurfacing. READ MORE