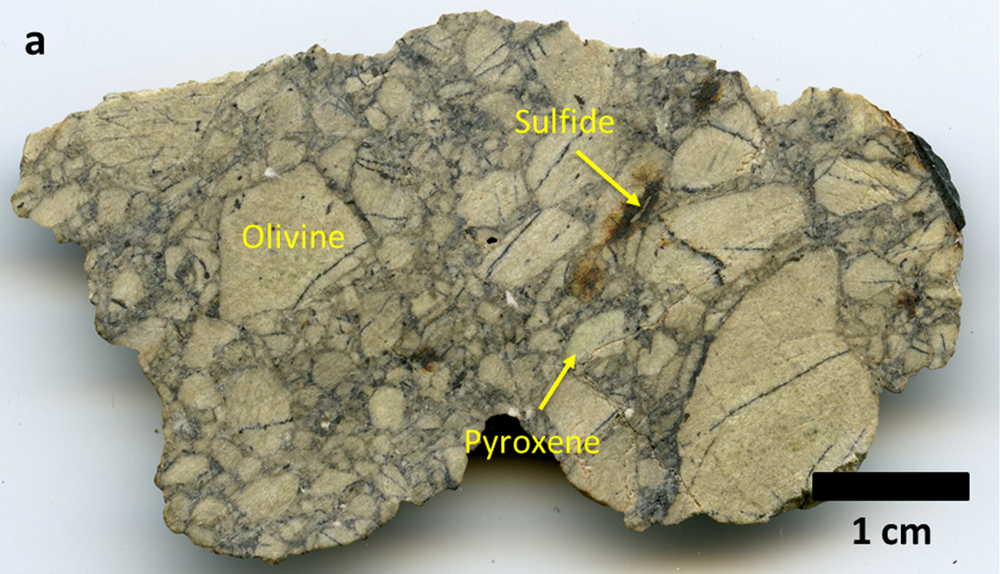 Figure 1a from Vaci et al. (2021) showing the olivine-rich sample Northwest Africa 12217 that includes large, green, olivine clasts, dark veins that formed through shock when this meteorite formed, and dark-brown material from weathering after it arrived on Earth. Credit: Vaci et al., 2021.

Rocky, planet-sized bodies in the solar system have undergone large-scale differentiation into three major parts: metallic cores, dense silicate mantles, and less-dense silicate crusts. For terrestrial planets such as Earth, mantle compositions (though generally hidden below the crust) are constrained through seismic data, the mineralogy of a few mantle rocks exposed at the surface, and computational modeling. These data show that the mantles of terrestrial planets are predominantly composed of the magnesium- and iron-rich mineral olivine and its high-pressure polymorphs. One of the largest asteroids, 4 Vesta, is also thought to have been differentiated and hypothesized to have an olivine-rich mantle. However, there are a lack of olivine-rich samples among the howardite-eucrite-diogenite (HED) meteorites that are thought to come from Vesta. There is also a lack of olivine spectra in remote sensing data from Vesta to support that hypothesis.

A team led by Zoltan Vaci at the University of New Mexico studied the petrology, geochemistry, and isotope compositions of three recently found olivine-rich meteorites, Northwest Africa 12217, 12319, and 12562. They showed that these samples are likely derived from Vesta or other Vesta-like asteroids. The variability in relative abundances of magnesium and iron in the olivine in these samples, along with other properties, suggests that they sampled small, heterogeneous magma bodies rather than a large, homogeneous reservoir. This conclusion supports data from the Dawn mission, which investigated Vesta and found that even the largest impact craters did not expose olivine-rich material. This suggests that the Vestan mantle is not as extensive as previously thought. In concert with data from the Dawn mission, these new samples provide new insights into the formation and differentiation of rocky bodies in the solar system and suggest that the histories of how mantles and crusts formed are more complex and varied than previously thought. READ MORE