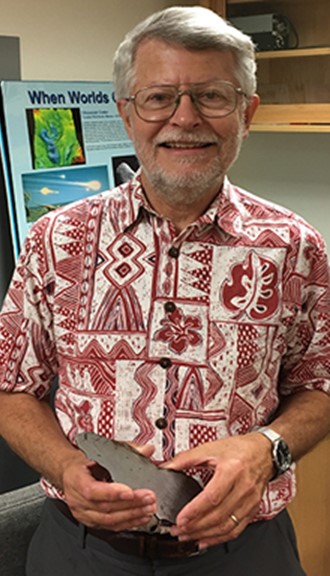 Edward Robert Dalton Scott passed away unexpectedly on October 7, 2021, at his home in San Rafael, California. Scott was a distinguished meteoriticist, former President of the Meteoritical Society, and Emeritus Professor at the School of Ocean and Earth Science and Technology (SOEST) at the Hawai‘i Institute of Geophysics and Planetology (HIGP). He was 74 years old.

Born in Heswall, England, Scott earned B.A. and M.A. degrees from the University of Cambridge’s Churchill College, majoring in mineralogy and crystallography with a minor in physics and materials science. In 1972, he received his Ph.D. from the University of Cambridge with a thesis on the geochemistry, mineralogy, and petrology of iron meteorites.

Scott was a superb scientist with deep curiosity about the solar system and its origin. Throughout his career, he did innovative research into the nature and origin of all types of meteorites, from iron meteorites to origins of primitive components in chondritic meteorites, the nature of processes operating in the cloud of gas and dust surrounding the Sun as it was still forming, and the accretion of nebular dust into asteroids and planetesimals. He was a big thinker who liked complicated problems.

Scott’s accomplishments were recognized by receiving the Leonard Medal from the Meteoritical Society, an international organization founded in 1933 to promote the study of extraterrestrial materials and planetary science. The Leonard Medal recognizes outstanding contributions to the science of meteoritics and closely allied fields. Besides receiving this award, has was also recognized by having asteroid 4854 named “Edscott” in 2000 and by having the first natural occurrence of the iron carbide Fe5C2 named after him:  edscottite. Over the years, he also held numerous positions with the Meteoritical Society, including serving as its President, and he served as an Associate Editor for both the Journal of Geophysical Research and Meteoritics & Planetary Science.

Scott was a devoted educator, teaching courses at both the undergraduate and graduate levels. For many years he was Associate Director of the Hawai‘i Space Grant Consortium, managing the undergraduate fellowship program, which links University of Hawai‘i (UH) undergraduate students with faculty members to do research on projects in space science and engineering. Scott was a beloved member of not only the UH faculty but the planetary science community as a whole. In the words of one of his HIGP colleagues, Scott was a “quintessential gentleman’s gentleman, a science friend to all.” He certainly was that and much more and will be greatly missed.