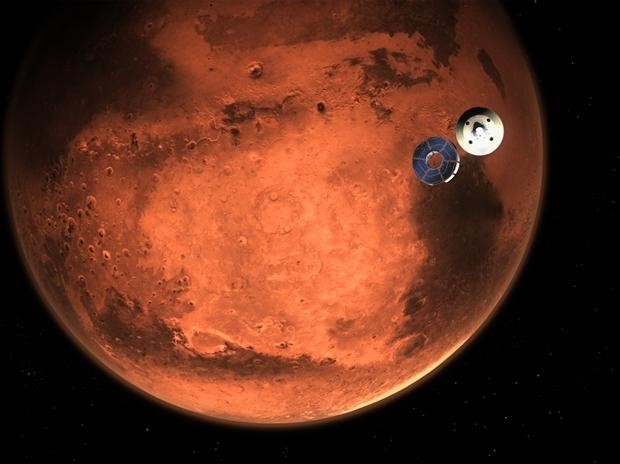 On February 18, the Perseverance rover entered the martian atmosphere at 5.6 kilometers per second on its way to Jezero Crater. The rover slowed significantly using its entry, descent, and landing system, which included jettisoning two 75-kilogram cruise mass balance devices (CMBDs) to help adjust the spacecraft’s lift-to-drag ratio. Pre-landing models of the CMBD releases suggested that their impacts should be detectable by the NASA InSight lander. InSight has a seismometer that it uses to listen for marsquakes and natural impacts from meteorites. The release of the CMBDs provided a means to test current hypotheses on the ability of two types of seismic waves [P (pressure) and S (shear) waves] to travel through the martian subsurface when generated by an impact. When the CMBDs were jettisoned, InSight, situated 3,450 kilometers to the east, was listening.

Roughly five minutes before the rover landed, the CMBDs impacted at a speed of 3.8 kilometers per second, creating seismic waves that were expected to reach InSight seven minutes (P waves) and four to five hours (S waves) later. However, InSight did not detect the impacts. Because the seismic data was expected at specific times from known impact points, Benjamin Fernando from University of Oxford and colleagues were able to characterize the background noise level to a high degree and place an upper bound on the seismic amplitude produced by the CMBD impacts. The ability for seismic waves to travel through subsurface materials (e.g., rocks) depends on material properties such as hardness, porosity, and degree of hydration. Therefore, these results help to constrain the subsurface properties of Mars. Furthermore, as InSight was unable to detect the seismic waves produced by the impacts, despite pre-landing models showing that it should be possible, this shows that the conversion of kinetic energy to seismic energy on Mars is not as efficient as previously thought. READ MORE