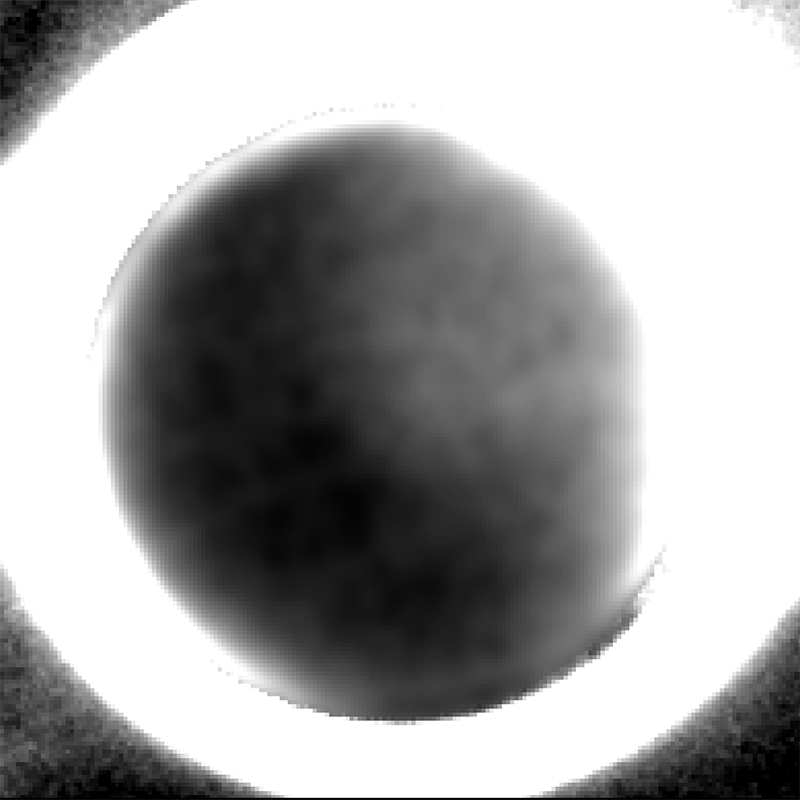 A grainy view of Pluto’s darkened hemisphere as imaged by New Horizons. The glare of the Sun around the dwarf planet’s rim almost drowns out the dim reflected light from Charon that illuminates the surface.
Credit: NOIRLAB/SwRI/JHUAPL/NASA.

The New Horizons flyby of Pluto in 2015 captured many stunning images of the sunlit side of the dwarf planet. However, much of Pluto, including the south pole, remained in darkness during the brief flyby, leaving only blurry images captured during the probe’s approach to provide scientists with the context of some regions in the southern hemisphere. Now, new image processing techniques have provided a grainy view of this obscured region.

A team led by Tod Lauer of the National Optical Infrared Astronomy Research Laboratory produced the images using the reflected sunlight from Pluto’s moon, Charon, as it dimly illuminated the dark side of the dwarf planet during the flyby. However, this was a challenging process because the combination of the Sun’s glare, Pluto’s hazy atmosphere, and the blurring from the moving spacecraft made it difficult to produce an interpretable image. The resulting image has relatively low resolution but provides an otherwise unobtainable look at Pluto’s surface processes.

The images revealed that Pluto’s south pole has quite a low albedo, indicating that it does not have many fresh deposits of bright nitrogen ice. This is surprising as the south pole had already entered seasonal darkness due to Pluto’s tilt when nitrogen in the atmosphere is expected to condense. This may indicate that Pluto’s surface has significant thermal inertia from its warmer summer, possibly due to the organic material covering the southern hemisphere. The researchers also identified a previously unseen high albedo (bright) feature that may be a fresh patch of condensed ice, likely in a topographic depression such as a crater, similar to other ice deposits found on Pluto. These results shed light on the dynamics of Pluto’s seasonal atmospheric cycles and provide an impetus for a return mission to Pluto that can more closely investigate the dwarf planet’s global properties. READ MORE