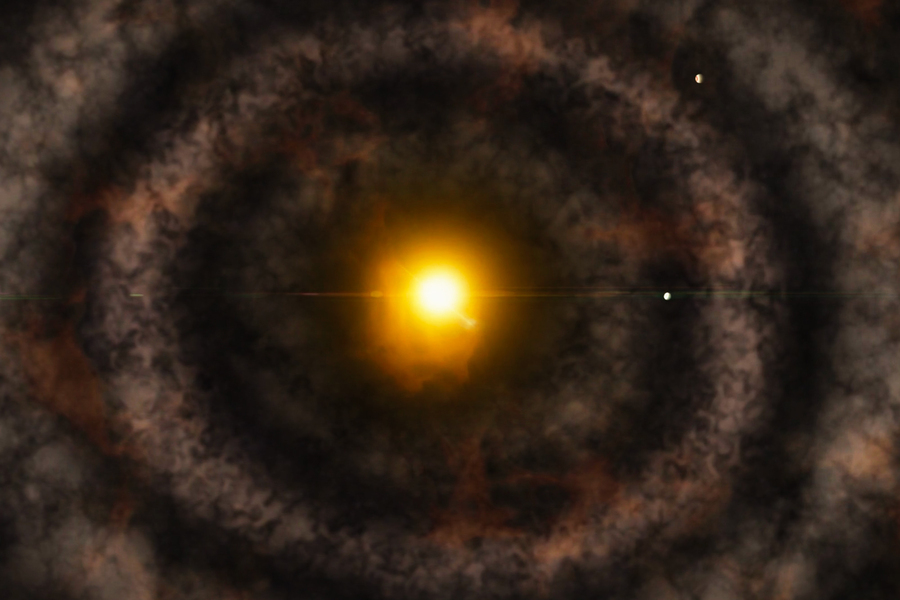 An artist’s interpretation of a protoplanetary disk. Credit: National Science Foundation, A. Khan.

Chondrules are droplets of rapidly crystallized melts that formed in the protoplanetary disk within the first four million years of solar system history and are commonly found in primitive meteorites. During chondrule formation, magnetic minerals such as kamacite, an iron-nickel alloy, can record the background magnetic field of the disk and retain this magnetic record for longer than the age of the solar system. Because the protoplanetary disk had large-scale magnetic fields generated by ionized gas, the paleomagnetic records in chondrules formed at different locations within the disk can provide information on the large-scale architecture of the early solar system.

Recent cosmochemical studies have revealed that meteorites and other solar system materials show a large-scale dichotomy in nucleosynthetic isotope compositions. This indicates the presence of two distinct reservoirs, referred to as carbonaceous and non-carbonaceous, in the earliest solar system. A new study led by Cauê Borlina of the Massachusetts Institute of Technology used paleomagnetic measurements from chondrules, each on order of 100 microns in size, from CO carbonaceous chondrite meteorites to shed light on the mechanism that maintained this dichotomy.

The results of this work showed that micro-paleomagnetic signatures for the CO chondrules indicate an intense magnetic field in the outer solar system (three to seven astronomical units from the Sun). This is in contrast to previous measurements of chondrules from the non-carbonaceous reservoir showing a less intense field within three astronomical units of the Sun. They concluded that since the accretion rate increases with magnetic field strength, some mechanism to remove mass from the disk may have been active in the early solar system, creating a gap between the two nucleosynthetic reservoirs. This mechanism could have been associated with the presence of Jupiter between the inner and outer solar system reservoirs and with winds driven by disk magnetism. READ MORE