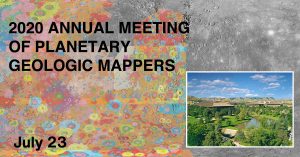 The 2020 Annual Meeting of Planetary Geologic Mappers was held virtually on July 23. Hosted by the Planetary Sciences Institute’s Denver Office, the meeting attracted 95 investigators from around the U.S. and Europe.

As is always the case, this meeting provided an excellent opportunity for researchers to give an update of their NASA-funded mapping efforts. Every year, progress toward the publication of a U.S. Geological Survey (USGS) Science Investigation Map (SIM) is discussed, as well as scientific results derived from this mapping. In addition, because of the ease of attendance, there were several presentations from the U.K. and other parts of Europe. This provided much-needed collegial interaction between international colleagues in the discipline of planetary geologic mapping.

The meeting kicked off with several programmatic talks. These included a summary of the NASA-USGS Planetary Geologic Mapping Program. USGS reported that there are currently 245 planetary maps printed and posted by the Survey, of which 127 are available in GIS format. Forty-six maps are active and in progress, and six of those are in production. NASA is currently selecting approximately 4 new mapping projects per year, out of an average of 17 submitted. The USGS also presented a change to the technical review process, wherein a panel-style review will be conducted as opposed to the collation of two or three separate reviews. This should lead to more consistent reviews and hence more rapid publication of planetary maps once they are funded.

The standardization of methods for mapping impact craters throughout the solar system was also presented. As multiple small bodies (e.g., asteroids and comet nuclei) are now being imaged at high resolution, developing a consistent mapping approach to show impact craters is beneficial. Such methodologies will also become important as landing sites on the Moon and Mars are mapped at higher and higher spatial resolution.

In response to discussions at earlier Mappers’ Meetings, we also heard about the plans to run the first Planetary Mappers Workshop in 2021. This workshop would provide an opportunity for newcomers to learn more of the techniques of planetary geologic mapping and would combine classroom-style activities with field mapping and hands-on GIS techniques.

As is the case with other NASA programs, the National Research Council’s 2023–2033 Decadal Survey provides an opportunity for the planetary mapping community to address some of the perceived goals. A brief review of the current draft of the Planetary Mapping White Paper was presented, along with the request for input from the entire set of virtual attendees.

Multiple sessions were held to discuss the ongoing maps. These sessions included reports on maps of quadrangles on Mercury, Venus, the Moon, Mars, and outer solar system objects (Ceres and Triton). Global maps of Mercury, Europa, and Pluto were also presented, along with updates to some of the Apollo-era geologic maps of lunar landing sites. In addition to the funded maps heading to publication by the USGS, this meeting included many presentations from investigators working on less-formal maps. These include maps of the Mars 2020 (Perseverance Rover) landing site, as well as several efforts by European investigators to prepare for data collected by the BepiColombo mission now heading toward Mercury.

The hope is that this will be the only virtual Planetary Mappers’ Meeting. The plan is to return to person-to-person discussions in June 2021 in Flagstaff, Arizona. While online discussions are better than none at all, attendees noted the lack of hallway discussions of mapping techniques and science results. Newcomers to this community also missed the opportunity to get detailed comments from more seasoned mappers, and we all missed the camaraderie of the after-hours social gatherings. However, the online chat capability of the meeting provided a reasonable substitute for quizzing the presenters. Several attendees noted a need for future online discussions regarding philosophical aspects of mapping techniques and methods, which would more consistently engage international colleagues. Such follow-on virtual discussions are now being considered. Needless to say, if travel restrictions are still in place, the success of this year’s virtual meeting will be used as a model for a similar jamboree next year.

For more information about the meeting, including links to the program and abstracts, visit the meeting website at https://www.hou.usra.edu/meetings/pgm2020/.