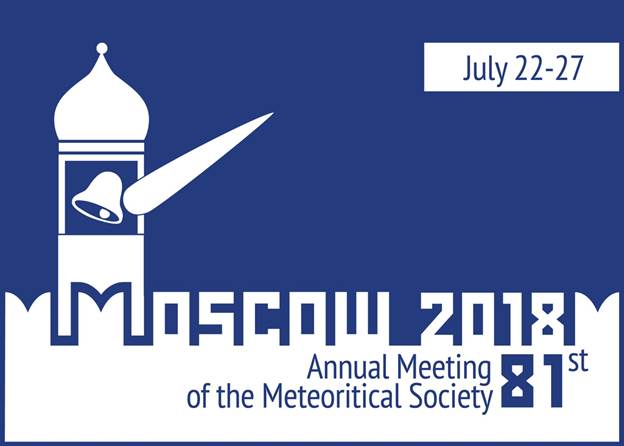 The 81st Annual Meeting of the Meteoritical Society (MetSoc) was held on July 22–27, 2018, in Moscow, Russia. The conference was hosted in the Presidium of Russian Academy of Sciences building, also called “Golden Brains.” Three hundred and two participants from 28 different countries registered for the meeting, including 213 professionals (scientists + exhibitors), 71 student participants, and 18 guests. A total of 164 registrants were MetSoc members. Exhibitors at the meeting included Springer Nature, CAMECA, and Textronica. In total, 358 abstracts were accepted for 204 oral and 154 poster presentations. Oral presentations were scheduled in three parallel sessions from Monday (July 22) to Friday (July 27), and all posters were on display for the entire duration of the conference.

Two pre-meeting tours to St. Petersburg and Yaroslavl were organized prior to the conference. Seventeen participants visited St. Petersburg on July 18–21, including the normal tourist sites as well as a visit to the A. P. Karpinsky Russian Geological Research Institute (VSEGEI), with its impressive Geological Museum and a special exhibition dedicated to the Popigai impact structure (visit led by Dr. Victor L. Masaitis). On July 20-22, Dr. Natalia Artemieva led a two-day tour to Yaroslavl, the capital of the Russian Golden Ring:  the group of 12 participants visited the depository of Russian superdeep drilling cores, including the 5-kilometer-deep drill core of the Puchezh-Katunki impact crater and the superdeep Kola borehole.

The conference kicked off on Sunday (July 23) with a pre-meeting workshop on “NEOs Hazard:  Multidisciplinary Approach,” convened by Drs. Olga Popova, Vladimir Svetsov, and Valery Shuvalov, as well as registration and a welcome reception at the V. I. Vernadsky State Geological Museum just next to the legendary national hotel and in front of Red Square. Several participants and guests also attended the ballet at the Bolshoi Theater on Saturday and Sunday.

The official opening ceremony took place on Monday, July 23 with greetings by the Head of the Meteoritics Committee of Russia, Erik Galimov; the director of the Vernadsky Institute of the Russian Academy of Sciences, Dr. Yuri Kostitsyn; and the Vice-Rector of Kazan Federal University, Dr. Danis Nurgaliev. A talk was also given by the head of the meteoritics lab at the Vernadsky Institute, Dr. D. D. Badyukov. The opening ceremony was followed by an award ceremony and a special lecture sponsored by MetSoc and presented by Dr. Artem Oganov (Skolkovo Institute of Science and Technology, Russia) on “High-Pressure Chemistry and Geochemistry:  New Results and Ideas.” Awardees’ lectures were given on Monday afternoon by Dr. Sasha Krot (Leonard Medal) and Dr. Thomas Kenkmann (Barringer Medal) and were followed by two special sessions:  “Evolution of the Solar Nebula:  Origin of the Moon and Planets” and a special session dedicated to the famous meteorite falls in Russia (Tunguska and Chelyabinsk).

One of the highlights of the meeting was the annual Barringer Invitational Lecture on Monday evening. Brother Guy Consolmagno SJ presented a talk on “The Philosophy of Meteoritics:  Awe, Faith and Data,” which attracted a number of external attendees.

The regular scientific sessions on Tuesday (July 24) were followed by a day off on Wednesday (July 25), giving meeting participants the opportunity to explore via a number of excursions, including a Moscow city tour, a Moscow boat tour, and three consecutive guided tours to the Kremlin and the Fersman Mineralogical Museum (FMM).

Both poster sessions on Tuesday and Thursday evening were very well attended. Having the poster venue open and available through the entire week of the meeting helped to encourage and facilitate networking between young and senior scientists.

The conference concluded on Friday afternoon (July 27) with a farewell party, where participants met each other in the Winter Garden, had lunch, and continued discussions on various scientific topics. Approximately 40 participants attended the Friday evening planetarium excursion to see the Star Hall and try to observe the Moon eclipse.

Three post-conference excursions were organized:  a three-day tour to St. Petersburg; a tour of Kazan (including a field trip to Karla crater); and a tour of Ekaterinburg and Chelyabinsk, which included seeing the main mass of the Chelyabinsk meteorite, recovered from Chebarkul Lake in 2013.

For more information about the meeting, visit http://metsoc81-moscow.ru/. To view the program and abstracts, visit https://www.hou.usra.edu/meetings/metsoc2018/pdf/program.pdf.