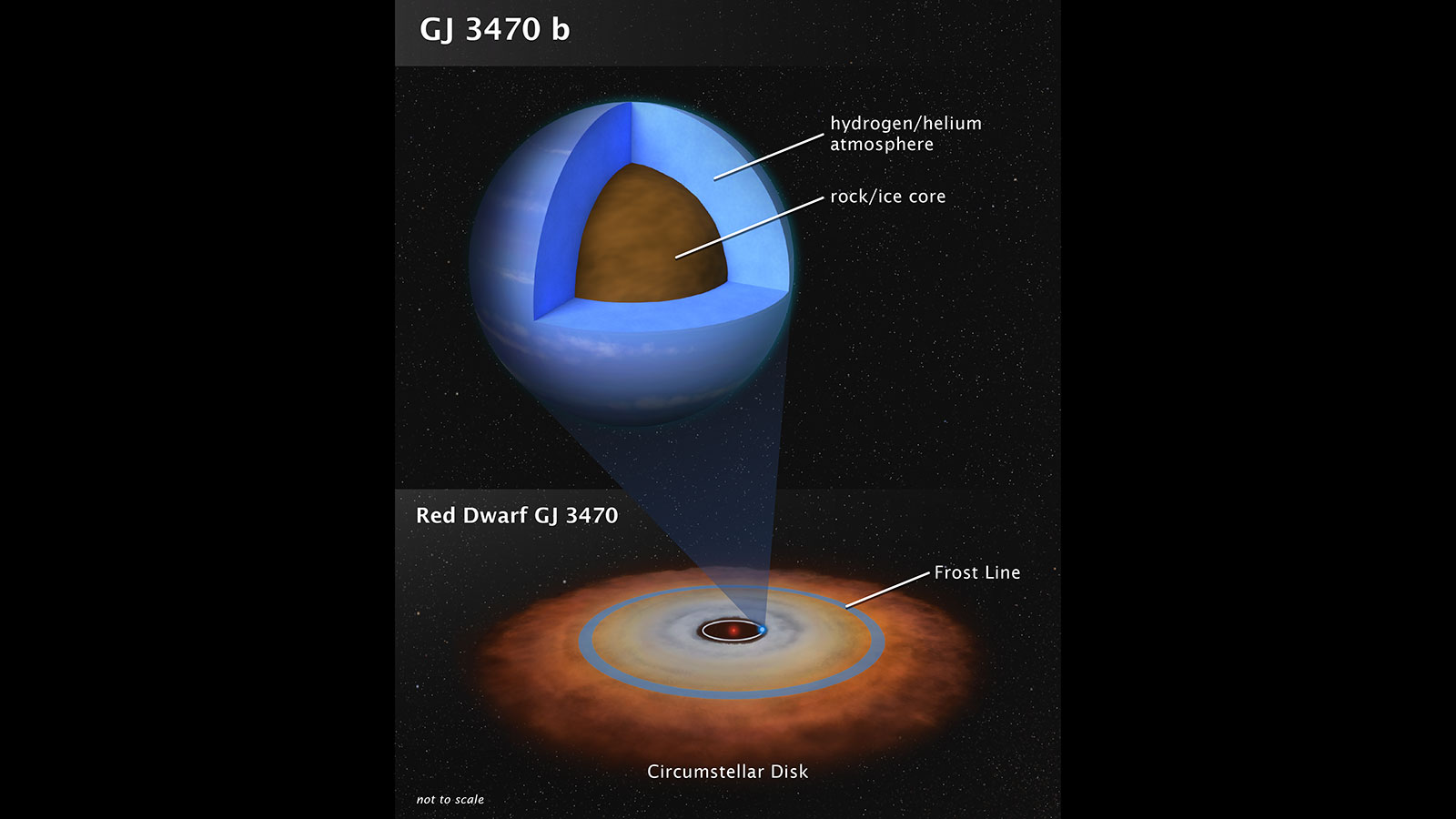 This artist’s illustration shows the theoretical internal structure of the exoplanet Gliese 3470 b. At 12.6 Earth masses, the planet is more massive than Earth, but less massive than Neptune. GJ 3470 b may have formed very close to its red dwarf star as a dry, rocky object. It then gravitationally pulled in hydrogen and helium gas from a circumstellar disk to build up a thick atmosphere. The bottom illustration shows the system before the disk dissipated. Image Credit: NASA, ESA, and L. Hustak (STScI).

Two NASA space telescopes have teamed up to identify, for the first time, the detailed chemical “fingerprint” of a planet between the sizes of Earth and Neptune. No planets like this can be found in our own solar system, but they are common around other stars.

The planet, Gliese 3470 b (also known as GJ 3470 b), may be a cross between Earth and Neptune, with a large rocky core buried under a deep, crushing hydrogen-and-helium atmosphere. Weighing in at 12.6 Earth masses (ME), the planet is more massive than Earth but less massive than Neptune (which is more than 17 ME).

Many similar worlds have been discovered by NASA’s Kepler space observatory, whose mission ended in 2018. In fact, 80% of the planets in our galaxy may fall into this mass range. However, astronomers have never been able to understand the chemical nature of such a planet until now, researchers say.

By inventorying the contents of GJ 3470 b’s atmosphere, astronomers are able to uncover clues about the planet’s nature and origin.

“This is a big discovery from the planet-formation perspective. The planet orbits very close to the star and is far less massive than Jupiter — 318 times Earth’s mass — but has managed to accrete the primordial hydrogen/helium atmosphere that is largely ‘unpolluted’ by heavier elements,” said Björn Benneke of the University of Montreal in Canada. “We don’t have anything like this in the solar system, and that’s what makes it striking.”

This was accomplished by measuring the absorption of starlight as the planet passed in front of its star (transit) and the loss of reflected light from the planet as it passed behind the star (eclipse). All told, the space telescopes observed 12 transits and 20 eclipses. The science of analyzing chemical fingerprints based on light is called “spectroscopy.”

“For the first time we have a spectroscopic signature of such a world,” said Benneke. But he is at a loss for classification: Should it be called a “super-Earth” or “sub-Neptune?” Or perhaps something else?

Fortuitously, the atmosphere of GJ 3470 b turned out to be mostly clear, with only thin hazes, enabling the scientists to probe deep into the atmosphere.

“We expected an atmosphere strongly enriched in heavier elements like oxygen and carbon which are forming abundant water vapor and methane gas, similar to what we see on Neptune,” said Benneke. “Instead, we found an atmosphere that is so poor in heavy elements that its composition resembles the hydrogen/helium-rich composition of the Sun.”

Other exoplanets, called “hot Jupiters,” are thought to form far from their stars and over time migrate much closer. But this planet seems to have formed just where it is today, said Benneke.

The most plausible explanation, according to Benneke, is that GJ 3470 b was born precariously close to its red dwarf star, which is about half the mass of our Sun. He hypothesizes that essentially it started out as a dry rock and rapidly accreted hydrogen from a primordial disk of gas when its star was very young. The disk is called a “protoplanetary disk.”

“We’re seeing an object that was able to accrete hydrogen from the protoplanetary disk but didn’t run away to become a hot Jupiter,” said Benneke. “This is an intriguing regime.”

One explanation is that the disk dissipated before the planet could bulk up further. “The planet got stuck being a sub-Neptune,” said Benneke.

NASA’s upcoming James Webb Space Telescope will be able to probe even deeper into GJ 3470 b’s atmosphere, thanks to Webb’s unprecedented sensitivity in the infrared. The new results have already spawned great interest from American and Canadian teams developing the instruments on Webb. They will observe the transits and eclipses of GJ 3470 b at light wavelengths where the atmospheric hazes become increasingly transparent.