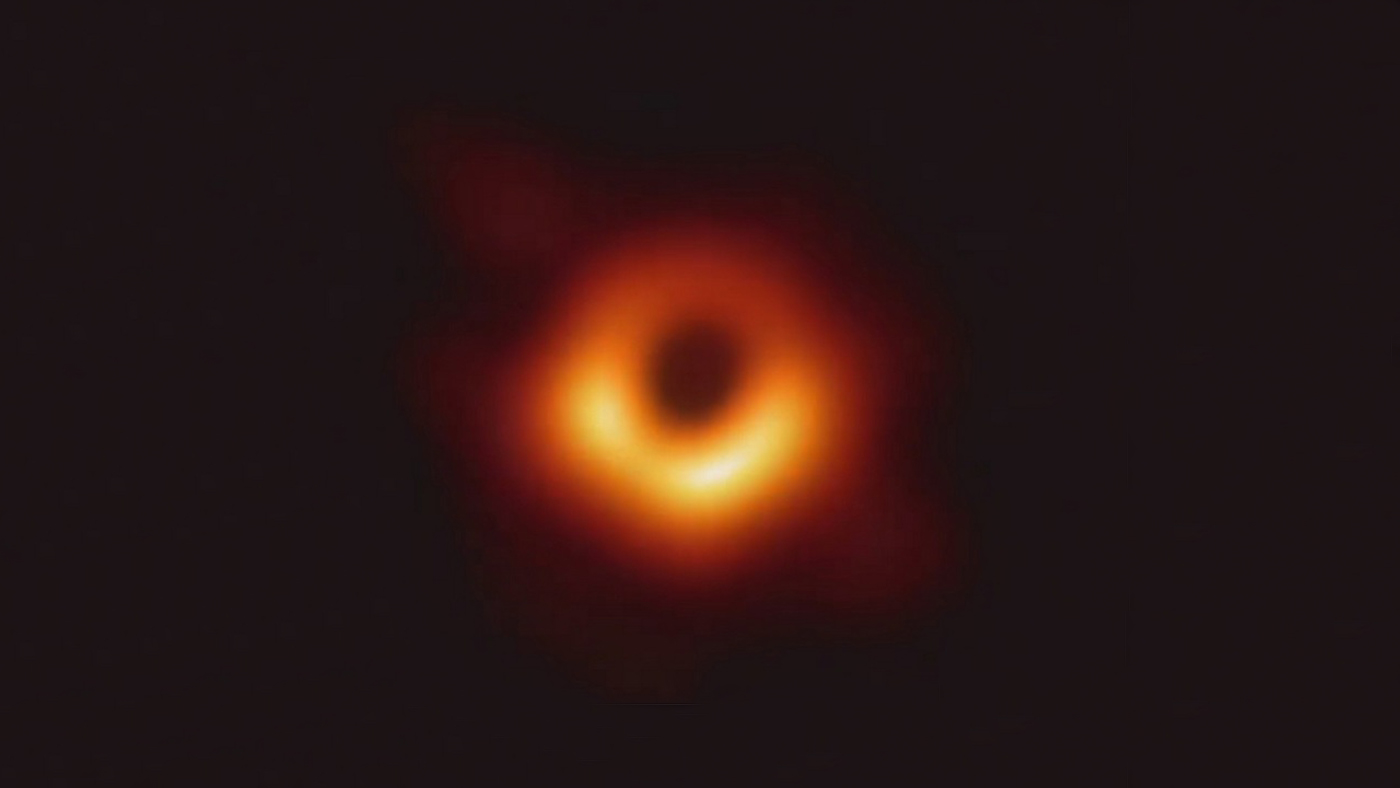 A black hole and its shadow have been captured in an image for the first time, a historic feat by an international network of radio telescopes called the Event Horizon Telescope (EHT). EHT is an international collaboration whose support in the U.S. includes the National Science Foundation.

A black hole is an extremely dense object from which no light can escape. Anything that comes within a black hole’s “event horizon”, its point of no return, will be consumed, never to re-emerge, due to the black hole’s unimaginably strong gravity. By its very nature, a black hole cannot be seen, but the hot disk of material that encircles it shines brightly. Against a bright backdrop, such as this disk, a black hole appears to cast a shadow.

The stunning new image shows the shadow of the supermassive black hole in the center of Messier 87 (M87), an elliptical galaxy some 55 million light-years from Earth. This black hole is 6.5 billion times the mass of the Sun. Catching its shadow involved eight ground-based radio telescopes around the globe, operating together as if they were one telescope the size of our entire planet.

“This is an amazing accomplishment by the EHT team,” said Paul Hertz, director of the astrophysics division at NASA Headquarters in Washington. “Years ago, we thought we would have to build a very large space telescope to image a black hole. By getting radio telescopes around the world to work in concert like one instrument, the EHT team achieved this, decades ahead of time.”

To complement the EHT findings, several NASA spacecraft were part of a large effort, coordinated by the EHT’s Multiwavelength Working Group, to observe the black hole using different wavelengths of light. As part of this effort, NASA’s Chandra X-ray Observatory, Nuclear Spectroscopic Telescope Array (NuSTAR) and Neil Gehrels Swift Observatory space telescope missions, all attuned to different varieties of X-ray light, turned their gaze to the M87 black hole around the same time as the EHT in April 2017. NASA’s Fermi Gamma-ray Space Telescope was also watching for changes in gamma-ray light from M87 during the EHT observations. If EHT observed changes in the structure of the black hole’s environment, data from these missions and other telescopes could be used to help figure out what was going on.

While NASA observations did not directly trace out the historic image, astronomers used data from NASA’s Chandra and NuSTAR satellites to measure the X-ray brightness of M87’s jet. Scientists used this information to compare their models of the jet and disk around the black hole with the EHT observations. Other insights may come as researchers continue to pore over these data.

There are many remaining questions about black holes that the coordinated NASA observations may help answer. Mysteries linger about why particles get such a huge energy boost around black holes, forming dramatic jets that surge away from the poles of black holes at nearly the speed of light. When material falls into the black hole, where does the energy go?

“X-rays help us connect what’s happening to the particles near the event horizon with what we can measure with our telescopes,” said Joey Neilsen, an astronomer at Villanova University in Pennsylvania, who led the Chandra and NuSTAR analysis on behalf of the EHT’s Multiwavelength Working Group.

NASA space telescopes have previously studied a jet extending more than 1000 light-years away from the center of M87. The jet is made of particles traveling near the speed of light, shooting out at high energies from close to the event horizon. The EHT was designed in part to study the origin of this jet and others like it. A blob of matter in the jet called HST-1, discovered by Hubble astronomers in 1999, has undergone a mysterious cycle of brightening and dimming.

Chandra, NuSTAR, Swift, and Fermi, as well as NASA’s Neutron star Interior Composition Explorer (NICER) experiment on the International Space Station, also looked at the black hole at the center of our own Milky Way galaxy, called Sagittarius A*, in coordination with EHT.

Getting so many different telescopes on the ground and in space to all look toward the same celestial object is a huge undertaking in and of itself, scientists emphasize.

“Scheduling all of these coordinated observations was a really hard problem for both the EHT and the Chandra and NuSTAR mission planners,” Neilsen said. “They did really incredible work to get us the data that we have, and we’re exceedingly grateful.”

Neilsen and colleagues who were part of the coordinated observations will be working on dissecting the entire spectrum of light coming from the M87 black hole, all the way from low-energy radio waves to high-energy gamma rays. With so much data from EHT and other telescopes, scientists may have years of discoveries ahead.