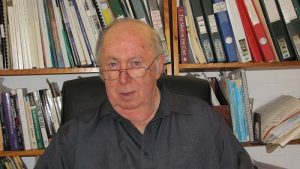 Dr. Brian J. O’Brien, a space scientist whose career spanned the entire history of space exploration, died in Australia on August 7, 2020, at the age of 86. His space instruments were carried on spacecraft ranging from the original Explorer missions to the lunar landings and his scientific contributions covered a period of more than 60 years.

O’Brien graduated in Physics from the University of Sydney in 1954 and received his Ph.D. in Physics there in 1957. The dawning of the space program in the late 1950s captured his curiosity, and he moved to the University of Iowa to work with Professor James Van Allen on the early Explorer satellites as an Assistant then Associate Professor. This experience honed his skills in spacecraft technology and his interests moved to the study of lower-energy particles, shifting from the megaelectron-volt energies of the early Geiger counters on the Explorers to the kiloelectron-volt energies of the precipitating particles that caused the aurora.

The growth of interest in space exploration led to the creation of the Space Science department at Rice University, and O’Brien became a Professor in the new department beginning in 1963. His expertise in instruments and satellites led to multiple missions ranging from the Twins sounding rockets from Fort Churchill to the Aurora 1 satellite. His creativity, motivation, and persistence were passed on to his students, for whom he was an outstanding teacher and mentor.

With President Kennedy’s commitment of the nation to sending astronauts to the Moon, O’Brien broadened his space interests to exploring the more distant reaches of the Earth’s magnetosphere in the geotail by pursuing the possibility of placing particle instruments on the surface of the Moon on the Apollo Lunar Surface Experiments Package (ALSEP) mission. His success in this pursuit is illustrated by an occurrence leading up to the selection. NASA planned a pre-proposal conference at the Manned Spacecraft Center to solicit ideas for the scientific payload. Multiple scientists gathered in the room to talk about their ideas and concepts for the ALSEP package, showing charts and sketches. When it became O’Brien’s turn to speak, he reached down into his briefcase at his feet and pulled out an ion/electron instrument that had already flown successfully on his sounding rockets and Aurora 1 satellite and said, “I’d like to fly this to the Moon!”  It was selected by NASA and flew on three missions to the Moon.

As the plans and technology were developing in the 1960s for the Apollo missions, a concern was raised about the dust on the surface of the Moon and whether it was so deep that the landing spacecraft would sink into the surface. There was evidence on both sides of the issue. In talking with Buzz Aldrin, O’Brien became interested in trying to measure the amount of the pervasive dust because it could affect the operation of the instruments on the lunar surface and might compromise the safe operation of many of the technical systems including the astronaut’s equipment and the interior of the lunar lander and from it to the Command Module with which the lander would later dock after the landing. The ALSEP package had already been accepted and was being built. On a plane flight home after one of the ALSEP investigator meetings, O’Brien had an idea about how to easily measure the amount of floating dust that could be created by the astronauts activities and by the launch of the upper portion of the Lunar Excursion Module rocket when it took the astronauts back up to the orbiting Command Module. His idea was to have a small solar cell mounted on the side of one of the instruments on the ALSEP and to measure the change in the solar cell current caused by the amount of dust that was floating around during different lunar conditions. NASA resisted this late addition to the payload, but finally agreed. The Lunar Dust Detectors were built and flown on Apollos 11, 12, 13, and 14. The knowledge of the lunar environment that came from these detectors has been used continuously, and O’Brien’s papers on this subject are still important. These results were most recently used by the Chinese space program in designing their lunar rover, which is on the backside of the Moon, and will doubtlessly be used in the design of the new spacecraft that will take astronauts to the lunar surface as part of the Artemis program in the coming decade. He most recently gave a talk at the Workshop on Lunar Dust and Its Impact on Human Exploration at the Lunar and Planetary Institute on February 10, 2020, at the age of 86.

O’Brien returned to Australia in 1968 and became the Director of the Environmental Protection Authority for Western Australia and an Adjunct Professor at the University of Western Australia. He has published more than 400 papers. He received the NASA Medal for Exceptional Scientific Achievement and was elected a Fellow of the Australian Academy of Technological Sciences and Engineering.

O’Brien was a quintessential scientist and explorer. His curiosity, intellect, clever creativity, and indefatigable persistence and optimism created an exciting life and an enduring legacy for his science and for those of us who had the privilege of having our careers shaped by his foresight and enthusiasm. He will be missed, but the knowledge that he has left us will last forever.