Chasing the Moon:
The People, the Politics, and the Promise that Launched America into the Space Age

By Robert Stone and Alan Andres 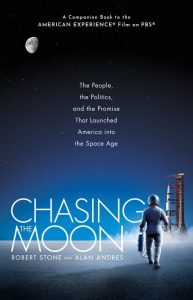 In 1961, President John F. Kennedy proposed the nation spend twenty billion dollars to land a man on the Moon before the end of the decade. Based on eyewitness accounts and newly discovered archival material, Chasing the Moon reveals for the first time the unknown stories of the fascinating individuals whose imaginative work across several decades culminated in America’s momentous achievement. More than a story of engineers and astronauts, the Moon landing — now celebrating its fiftieth anniversary — grew out of the dreams of science fiction writers, filmmakers, military geniuses, and rule-breaking scientists. They include science fiction author Arthur C. Clarke; Wernher von Braun; astronaut Frank Borman; mathematician and first woman to work in Mission Control Poppy Northcutt; and African American astronaut candidate Edward Dwight. Setting these key players in the political, social, and cultural climate of the time, and including captivating photographs throughout, Chasing the Moon focuses on the science and the history, but most important, the extraordinary individuals behind what was undoubtedly the greatest human achievement of the twentieth century. This title is a companion book to the American Experience film on PBS.