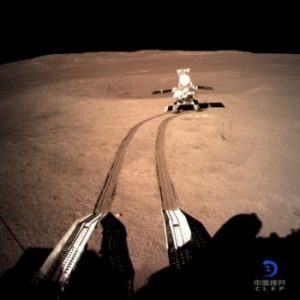 China’s Chang’e-4 lander and the well-wheeled rover have been switched to dormant mode within the Von Kármán crater in the South Pole-Aitken Basin on the farside of the Moon.

According to the Lunar Exploration and Space Program Center of the China National Space Administration the lander and Yutu-2 rover have entered the 14-day lunar night cycle after working satisfactorily for a 22nd lunar day. As of February 20, the mobile robot has traveled over 547.17 meters (1795 feet).

Meanwhile, preparations are underway for the departure of Chang’e-5, the next mission in China’s expanding lunar exploration initiative.

Yu Dengyun, deputy chief designer of China’s lunar exploration program, said that Chang’e-5 will be launched by a Long March-5 heavy-lift booster from the Wenchang Space Launch Center in Hainan province by the end of 2020.

The 8.2-metric-ton robotic probe has four elements:  an orbiter, lander, ascender, and reentry module. After the probe reaches lunar orbit, the components will separate into two parts, with the orbiter and reentry module remaining in orbit while the lander and ascender go down to the lunar surface. The lander and ascender will make a soft landing and then get to work on tasks such as using a drill to collect underground rocks and a mechanical arm to gather lunar soil.

After the surface operations are completed, the ascender’s rocket will lift it to lunar orbit to dock with the reentry module. It will transfer lunar samples to the module, which then carries them back to Earth.

“First of all, its most important task will be collecting lunar samples. The environment on the lunar surface, like the gravity there, is very different from that on Earth. So we must ensure that our technologies are functional and reliable during the collection and packing processes,” Yu explained.

“The next challenge will be lifting the sample-carrying ascender from the Moon. All of our launches so far were made from Earth, but the coming launch will take place on lunar soil and use the Chang’e-5’s lander as the launchpad. Consequently, the challenge will be whether our equipment can handle the complicated operation as it was designed to do.”

After the capsule containing lunar collectibles is sent into orbit, it will approach the reentry module and dock with the latter, Yu said.

“Previous rendezvous and docking by our spaceships occurred in low-Earth orbit, but this time it will take place in a lunar orbit,” Yu said, adding that the last challenge will emerge during the Earth reentry process. The entry capsule will descend through Earth’s atmosphere at a speed of 11.2 kilometers per second, much faster than previous reentry speeds of Chinese spacecraft.

If successful, the mission will make China the third nation to haul back to Earth lunar samples — following the former Soviet Union’s robotic Moon program that ended in 1976, and the United States Apollo Moon landing program that concluded in 1972.

Chang’e-6 is expected to land at the Moon’s south pole and carry back to Earth lunar regolith samples. Chang’e-7 is set to conduct a thorough investigation of the lunar south pole. Chang’e-8 will verify technologies that could be applied to future lunar expeditions, including a possible scientific outpost, according to the China National Space Administration.

— Portions of this article were provided by Leonard David