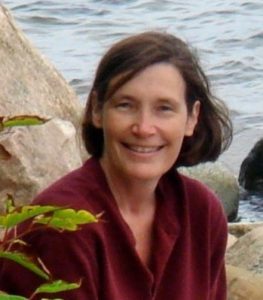 Dr. Christine Floss died unexpectedly at her home in St. Louis, Missouri, on April 19, 2018, at age 56. Floss was a research professor in the Department of Physics and McDonnell Center for Space Sciences at Washington University in St. Louis. She was a long-time member and a fellow of the Meteoritical Society, as well as an expert in the trace-element and isotopic analysis of planetary materials, meteorites, and presolar grains, studying the origin and evolution of the solar system. Floss was a gifted and dedicated scientist and mentor, and an extraordinary colleague, collaborator, and friend to many in the cosmochemistry and planetary science community.

Floss’ research interests spanned a wide variety of extraterrestrial materials, from lunar samples to meteorites to presolar grains to returned samples from the NASA Stardust and Genesis missions to Antarctic micrometeorites to interplanetary dust particles. She played an important role in the chemical and isotopic studies of interplanetary dust particles, micrometeorites, and primitive chondrites to understand the origins and abundances of presolar and protosolar components in these materials. She performed isotopic and compositional studies of residues from Stardust craters and hypervelocity impact experiments to characterize the samples returned from Comet 81P/Wild 2. Identification and characterization of craters from the Stardust interstellar dust collector was also part of her scientific work. She played a leading role in trace-element-distribution studies of individual minerals in extraterrestrial samples, to understand their petrogenesis as well as secondary effects occurring on their parent bodies (thermal metamorphism, aqueous alteration).

Floss earned a B.A. in German from Purdue University in 1983; a second degree in Geology from Indiana University, Bloomington, in 1987; and a Ph.D. in Geochemistry from the Department of Earth and Planetary Sciences at Washington University in St. Louis in 1991. Her dissertation focused on rare-Earth-element (REE) distributions in meteorites (e.g., aubrites) and ferroan anorthosites, working with Ghislaine Crozaz. She showed that the heterogeneous REE patterns in oldhamite from aubrites reflect condensation from the solar nebula, rather than igneous processes in a parent body, as was believed at that time. It was during her time at Washington University that she developed her expertise with — and love of — the ion microprobe as her instrument of choice to explore the characteristics and origins of extraterrestrial materials.

Floss moved to Heidelberg, Germany, in 1991 for a research scientist position at the Max-Planck-Institut für Kernphysik. In 1993, while in Heidelberg, she married Frank Stadermann. While at the Max-Planck-Institut, she published on aubrites, angrites, pallasites, showing early on the breadth of her interests. She was also involved with trace-element studies of lunar samples (returning often to ferroan anorthosites), eucrites, lodranites, and acapulcoites.

In 1996, Floss and Stadermann were invited to return to Washington University to work with their former advisors, Robert Walker and Ghislaine Crozaz. Floss joined the Laboratory for Space Sciences, now a part of the McDonnell Center for the Space Sciences, as a research scientist, and through the ensuing years, worked her way up to becoming a full research professor. Floss worked with numerous colleagues, doing careful ion microprobe work that was essential in many studies. Along with Frank Stadermann, Ernst Zinner, and other coworkers, she developed unique expertise with the first Cameca NanoSIMS 50 instrument. Floss had over 250 coauthors and over 100 publications in peer-reviewed journals, and she led numerous research projects as principal investigator. In 2006, main-belt asteroid 6689 was named asteroid Floss.

In addition to her prolific research career, Floss played an active role in the cosmochemistry community. She was a member of the Antarctic Search for Meteorites (ANSMET) team in 2014–2015, a reflection of her adventurous spirit. She served the scientific community in many ways, as a member of the Antarctic Meteorite Working Group, the Curation and Analysis Planning Team for Extraterrestrial Materials (CAPTEM), the LPSC program committee, various student and early career award committees, the Council of the Meteoritical Society, and many NASA review panels. She also served as the associate editor for Meteoritics and Planetary Science from 2005 to 2015. All these activities reflected Floss’ personality and character; she was selfless, serious, level-headed, balanced and fair, always positive and never complaining, a consummate professional.

At Washington University, Floss had a special role. Following in the giant footsteps of the likes of Robert Walker, Ernst Zinner, and Thomas Bernatowicz, Christine took on the role of lead scientist for the NanoSIMS and Auger Electron Microprobe laboratories, and served as mentor extraordinaire to a new generation of cosmochemistry students and analysts. She was a wonderful advisor to both undergraduate and Ph.D. students; she always took the time to support all her students whenever they needed help, whether it was work-related or personal. In 2015, she was honored with a Washington University Outstanding Faculty Mentor award. All her graduate students received NASA Earth and Space Science Fellowships for their research, which further attests to her excellent mentoring. She carried on a great tradition of the McDonnell Center for the Space Sciences at Washington University in training and mentoring students who have become strong contributors in the field of space science and who will certainly carry on in the same spirit of scientific curiosity and excellence as she did.

— Text courtesy of The Meteoritical Society