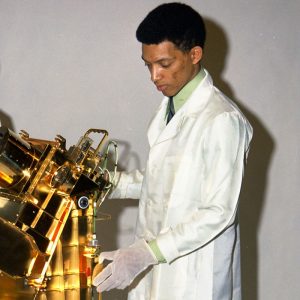 When the Apollo 16 mission landed on the Moon in 1972, astronauts set up the first observatory to survey the cosmos from a celestial body. It was designed and built by the astronomer George Carruthers. By capturing light in a part of the spectrum inaccessible to terrestrial telescopes, Carruthers’s Far Ultraviolet (FUV) lunar camera produced the first global images of Earth’s upper atmosphere, a region fundamental to communications, remote sensing, and the operation of space systems. The telescope also peered into deep space, shining light on star formation and clusters and the interstellar medium. Carruthers has died, aged 81.

As an African American, his contributions to high-profile human spaceflight missions made Carruthers a sought-after role model for Black scientists and engineers and those from other communities underrepresented in research and groups campaigning for equity in academia and industry. Carruthers was dedicated to mentoring students in schools, community centers, and universities. He advised them to build wide-ranging expertise early on so that they could adapt to emerging problems in research — guidance his father, a civil engineer, had given him.

Born in 1939 in Cincinnati, Ohio, Carruthers grew up in the Jim Crow era of racial-segregation laws, which formally ended only in 1964, the year he got his PhD. His family encouraged him to study mathematics and science, but it was his own reading of science-fiction and astronomy books that awakened his fascination with space flight. With the money he earned as a delivery boy, he ordered lenses and had built a telescope from cardboard tubing by the age of ten. When his father died in 1952, his mother moved the family to Chicago, Illinois. A few years later, Carruthers built a more advanced telescope at the city’s Adler Planetarium.

He tracked the progress of sounding rockets (which follow suborbital trajectories) and the earliest satellites and read up on the work of the Naval Research Laboratory (NRL) in Washington, DC. After gaining his PhD in aeronautical and astronomical engineering at the University of Illinois at Urbana-Champaign, he won a place on the NRL’s postdoctoral program.

So began Carruthers’s lifelong research career at the NRL. His first endeavor was using a sounding rocket to search for molecular hydrogen in space. He devised a better way to capture FUV spectra, amplifying diffuse and faintly lit objects. Like a video camera, his telescope converted photons into energetic electrons that were amplified and recorded by electron-sensitive film. The resulting compact telescope had flexible operating configurations that mimicked the capability of much larger systems.

In 1970, Carruthers’s telescope confirmed the existence of molecular hydrogen in interstellar space. This discovery, which received international acclaim, filled a significant gap in understanding the interstellar medium and provided a framework for explaining how stars form. It was then considered a step towards resolving the riddle of the Universe’s “missing mass.”

Sounding-rocket programs permitted frequent, relatively inexpensive, and short-turnaround opportunities to test and use sensors. Carruthers’s genius was in making very complex and delicate technology work flawlessly on space vehicles as they pitched, spun, and shook. He was intensely focused on designing, building, and “testing, testing, testing.”

The Apollo 16 lunar camera and spectrograph produced global-scale images of Earth’s upper atmosphere, including its outer ionized layer, or ionosphere. These images revealed details about equatorial arcs of charged particles stretching around the globe — phenomena under study today as the interplay between the atmosphere and ionosphere. NRL theorists and observational astronomers have used the images to discover new features and confirm earlier localized samplings.

Carruthers’s Earth images have paved the way for global space-weather forecasting in the same way that global satellite systems are used to predict surface weather. Elements of current NASA missions that focus on the ionosphere and upper atmosphere (ICON and GOLD) can be traced to Carruthers’s first global images.

Carruthers continued to study the upper atmosphere and probe the structure of the Universe. From the Skylab space station in 1973–1974, his camera mapped stars, interstellar clouds, and other objects, producing data that improved navigation, remote sensing, and astronomy. From a sounding rocket in 1974, he produced the first images of the atomic hydrogen corona surrounding comet Kohoutek and, later, similar images of comet Halley.

He was instrumental in setting up the NRL’s high-school apprenticeship program, short courses at community centers, and continuing education for local teachers. Through Project SMART, he enhanced outreach at the National Air and Space Museum and the historically Black Howard University in Washington, DC. The legacy of Carruthers’s outreach work continues today. NRL space scientist McArthur Jones co-chairs the task force on diversity, equity, and inclusion set up as part of the US National Science Foundation’s CEDAR (Coupling, Energetics, and Dynamics of Atmospheric Regions) program. Others whom Carruthers inspired can be found at institutions from the US Air Force Research Laboratory to universities and aerospace businesses.

Carruthers was a man of vision. Usually reserved, his demeanor was transformed when he was generously sharing his wisdom and his scientific and engineering prowess. He opened doors for local young people by opening himself up to them. Of racism, he said, “When I was their age, I had no role models because nobody ever publicized them, not that they didn’t exist…therefore many of the minority students didn’t know that they had a future in science.” Carruthers worked to change that.