Enceladus and the Icy Moons of Saturn 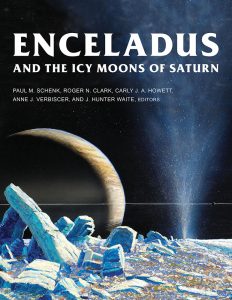 With active geysers coating its surface with dazzlingly bright ice crystals, Saturn’s large moon Enceladus is one of the most enigmatic worlds in our solar system. Underlying this activity are numerous further discoveries by the Cassini spacecraft, tantalizing us with evidence that Enceladus harbors a subsurface ocean of liquid water. Enceladus is thus newly realized as a forefront candidate among potentially habitable ocean worlds in our own solar system, although it is only one of a family of icy moons orbiting the giant ringed planet, each with its own story. As a new volume in the Space Science Series, Enceladus and the Icy Moons of Saturn brings together nearly eighty of the world’s top experts writing more than twenty chapters to set the foundation for what we currently understand, while building the framework for the highest-priority questions to be addressed through ongoing spacecraft exploration. Topics include the physics and processes driving the geologic and geophysical phenomena of icy worlds, including, but not limited to, ring-moon interactions, interior melting due to tidal heating, ejection and reaccretion of vapor and particulates, ice tectonics, and cryovolcanism. By contextualizing each topic within the profusion of puzzles beckoning from among Saturn’s many dozen moons, Enceladus and the Icy Moons of Saturn synthesizes planetary processes on a broad scale to inform and propel both seasoned researchers and students toward achieving new advances in the coming decade and beyond.