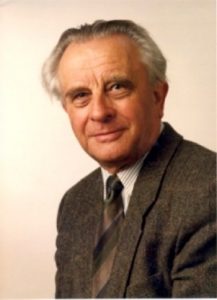 Friedrich (“Fred”) Begemann passed away on May 11, 2018, at the age of 90. Begemann was the director of the Isotope Cosmology Department at the Max-Planck-Institut für Chemie (MPI-C) in Mainz (Germany) from 1978 until his retirement in 1995 and the 1995 recipient of the Meteoritical Society’s Leonard Medal.

Begemann was born in late 1927 in the small village of Almena in Westphalia, close to the border of Lower Saxony and near the river Weser. Too young to get drafted for serious military service in World War II, he took up the study of physics at the University of Göttingen in 1947 and completed his diploma thesis, working with Friedrich Houtermans, who by then had returned to Göttingen after being forced to leave in 1933. When Houtermans moved to Bern, Switzerland, in 1952, Begemann followed him there (together with Johannes Geiss) to work on his Ph.D. thesis. In his work with Houtermans, Begemann dealt with the products of the radioactive decay of uranium and thorium into (eventually) isotopes of lead. He determined the half-life of radioactive Ra-E (210Bi), an isotope in the decay chain leading from 238U to 206Pb, and applied the Ra-D (210Pb) method suggested by Houtermans to determine a chemical age for minerals.

Following his Ph.D. work, Begemann moved to Chicago to work with Willard F. Libby as a Research Associate at the Enrico Fermi Institute. Here, he focused on tritium (3H), the radioactive isotope of hydrogen, and over the following decade published a number of important papers on its abundance, origin, and distribution. This was a hot topic at the time due to the enormous amounts of tritium released into the environment from hydrogen bomb tests. Drawn to the group of Harold Urey and other researchers at Chicago, Begemann developed an interest in meteorites and analyses of stable noble gas isotopes, specifically 3He, the decay product of tritium. His paper with Johannes Geiss and D. C. Hess, in which they reported the first determination of a cosmic-ray exposure (CRE) age of a meteorite from combined tritium/3He analysis, was a milestone article. Their work set the stage for the development of a completely new branch in meteoritics. Today, the study of cosmic-ray products in meteorites is a mature field. Not only does it provide the means to determine exposure ages, and therefore travel times from parent body to Earth, but it also puts constraints on their pre-atmospheric size — both very basic properties.

In 1957, Begemann joined Friedrich Paneth at the MPI-C in Mainz, where he remained until his retirement in 1995, interrupted only by a short stint as a Guest Professor at the University of Bern. While in Mainz he also became an adjunct professor at Johannes-Gutenberg University, teaching experimental physics in addition to doing research at the Max-Planck-Institute. While his early work in Mainz is still dominated by the study of radiation effects, including those found in the lunar samples returned by the Apollo missions, in time he began to focus more on the mass spectrometric determination of stable isotope compositions, noble gases in particular, but also elements like potassium and magnesium, where he was one of the first to confirm the existence in the early solar system of now-extinct 26Al from overabundances of 26Mg in calcium-aluminum-rich inclusions (CAIs).

Having already been appointed a “Scientific Member” of the Max-Planck Society in 1969, Begemann became the director of a new Department at the MPI-C in 1978, which he led until his retirement in 1995. This allowed him to expand this direction of research. A number of important contributions from this time dealt with noble gases in martian meteorites and the isotopes of noble gas and other trace elements in presolar grains. He also contributed to refined understanding of cosmic-ray interactions with meteorites by pointing out the “matrix effect” and by enabling the performance of irradiation simulation experiments on artificial meteorites. For this and his earlier work he was awarded the Leonard Medal of the Meteoritical Society in 1995. He also served the Society as a councilor from 1981 to 1984 and together with Heinrich Wänke organized the 1983 Annual Meeting with an unforgettable evening tour and dinner on the Rhine River.

Defining characteristics of Begemann were his analytical mind and sharp wit, which were second to none. He was able to detect the slightest flaw or uncertainty in someone’s logic, and would not hesitate to tell them so. Sometimes, this may have been hard to take, but we need such minds to challenge us.

— Text courtesy of Ulrich Ott and The Meteoritical Society