Gerard P. Kuiper and the Rise of Modern Planetary Science 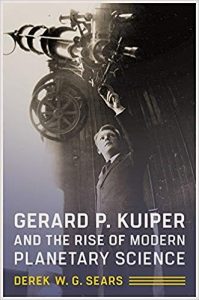 Astronomer Gerard P. Kuiper ignored the traditional boundaries of his subject. Using telescopes and the laboratory, he made the solar system a familiar, intriguing place. “It is not astronomy,” complained his colleagues, and they were right. Kuiper had created a new discipline we now call planetary science. Kuiper was an acclaimed astronomer of binary stars and white dwarfs when he accidentally discovered that Titan, the massive moon of Saturn, had an atmosphere. This turned our understanding of planetary atmospheres on its head, and it set Kuiper on a path of staggering discoveries: Pluto was not a planet, planets around other stars were common, some asteroids were primary while some were just fragments of bigger asteroids, some moons were primary and some were captured asteroids or comets, the atmosphere of Mars was carbon dioxide, and there were two new moons in the sky, one orbiting Uranus and one orbiting Neptune. He produced a monumental photographic atlas of the Moon at a time when men were landing on our nearest neighbor, and he played an important part in that effort. He also created some of the world’s major observatories in Hawai‘i and Chile. However, most remarkable was that the keys to his success sprang from his wartime activities, which led him to new techniques. This would change everything. Author Derek Sears shows a brilliant but at times unpopular man who attracted as much dislike as acclaim. This in-depth history includes some of the twentieth century’s most intriguing scientists, from Harold Urey to Carl Sagan, who worked with—and sometimes against—the father of modern planetary science. Now, as NASA and other space agencies explore the solar system, they take with them many of the ideas and concepts first described by Gerard P. Kuiper.