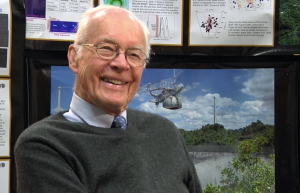 Gordon Hemenway Pettengill, professor emeritus of planetary physics in the Department of Earth, Atmospheric and Planetary Sciences (EAPS) at Massachusetts Institute of Technology (MIT), former director of the MIT Center for Space Research, and pioneer in radio astronomy, died peacefully at his home in Concord, Massachusetts, on May 8. He was 95.

Pettengill pioneered the use of radar for planetary astronomy applications, making groundbreaking observations of the Moon, the inner planets, and other solar system objects. His work was instrumental in the development of multiple NASA missions including the Apollo missions to the Moon and the Mariner 2, Pioneer, and Magellan missions to Venus.

Pettengill was born on February 10, 1926, in Providence, Rhode Island, and grew up in Dedham, Massachusetts. From a young age, he was drawn to radio and electronic technology, and even began trying to build his own radios from spare parts when he was 6 years old. In high school, Pettengill met other radio enthusiasts and became involved in amateur radio broadcasting under the call sign W1OUN. His passion for amateur radio would stick with him even as he rose to prominence as a professional radio astronomer.

At 16, Pettengill enrolled at MIT to study physics, but at 18 was drafted into the U.S. Army. When World War II ended in 1945, he was stationed in Austria and assigned to the Signal Corps, the Army’s military communications branch. After discharge from the Army, he finished his bachelor’s degree in physics at MIT in 1948. He went on to work at Los Alamos National Laboratory and, in 1955, earned his Ph.D. in high-energy physics from the University of California at Berkeley under Owen Chamberlain, the discoverer of the antiproton.

Pettengill returned to MIT just as the MIT Lincoln Laboratory Millstone Hill radar was under development — a government-commissioned pre-prototype missile-tracking system designed to be 1 million times more sensitive than traditional radar — and with it made a series of breakthrough observations in the nascent field of radio astronomy. When Millstone went online in 1957, Pettengill used the new technology to detect and track Sputnik 1, making the first radar observations of an Earth satellite without the aid of a transmitted beacon signal. In 1961, he aimed the system toward Venus, whose faint echoes heralded the use of radar to measure interplanetary distances. The results of these early experiments recalibrated the accuracy of the astronomical unit by three orders of magnitude, which proved instrumental in the successful navigation of NASA’s 1962 Mariner 2 mission to Venus.

During this time period, he also used Millstone to generate the first two-dimensional radar map of the Moon, which was a key advancement in NASA’s planning for the future Apollo landings. Pettengill’s work helped ensure that, according to Harvard University astrophysicist Irwin Shapiro, “the Apollo astronauts would not disappear under a meters-thick layer of dust.”

In 1963, Pettengill moved to Ithaca, New York, to become associate director, and later director, of the newly opened Arecibo Observatory in Puerto Rico, which was built and operated by Cornell University and which stood for 53 years as the largest single-aperture telescope in the world. Pettengill oversaw the installation of a powerful radar transmitter at the site and used it to correct a long-held misconception about Mercury. For almost a century, scientists had believed that Mercury was locked in a Sun-synchronous orbit, spinning just once over the 88 Earth days it takes the tiny planet to orbit the Sun. However, Pettengill and colleague Rolf Dyce were able to make radar measurements that revealed the Mercury “day” was, in fact, equivalent to about 59 Earth days, such that it spins three times for every two orbits around the Sun. This discovery catalyzed a resurgence in the study of planetary orbital dynamics in the solar system.

Upon stepping down as director at Arecibo in 1970, Pettengill returned to MIT as a professor of planetary physics in the Department of Earth and Planetary Sciences (which later became EAPS in 1983), where he remained until his retirement in 1995. During his tenure at MIT, he also served from 1984 to 1989 as director of MIT’s Center for Space Research, forerunner of the Kavli Institute.

While at MIT, he led groundbased microwave studies of the inner solar system using the Arecibo telescope and MIT’s Haystack Observatory, achieving many more breakthrough observations, including describing the surface properties of several asteroids and comet nuclei, detecting radar echoes from as far away as the Galilean moons of Jupiter, and, using the Very Large Array, measuring the microwave brightness of the continents of Venus.

In 1977, Pettengill turned his attention to tackling spacebased radar mapping. Serving as principal investigator for the radar instrumentation onboard NASA’s Pioneer Venus Orbiter, the mission generated the first near-global topographic map of any planet — better even than the current maps of Earth at the time, as the ocean floors remained largely unmapped. Later, Pettengill reprised this role during the Magellan mission to Venus. The Magellan measurements, taken from 1990–1994, resulted in near-photographic quality radar mapping — 98% of the surface was imaged at resolutions better than 100 meters per pixel — and remain our most detailed description of the surface and interior of that planet.

Pettengill was a member of the National Academy of Sciences (NAS) and a fellow of the American Academy of Arts and Sciences. In 1980, he was awarded a Guggenheim Fellowship to study astronomy and astrophysics while on sabbatical at the University of Sydney, Australia, and in 1994 earned the Magellanic Premium from the American Philosophical Society for his work on Venus. He was also recognized on multiple occasions by the American Geophysical Union, including the Fred Whipple Award from the Planetology Section in 1995 and the Charles A. Whitten Medal in 1997. Asteroid 3831 Pettengill was named in his honor.

— Text courtesy of the Massachusetts Institute of Technology