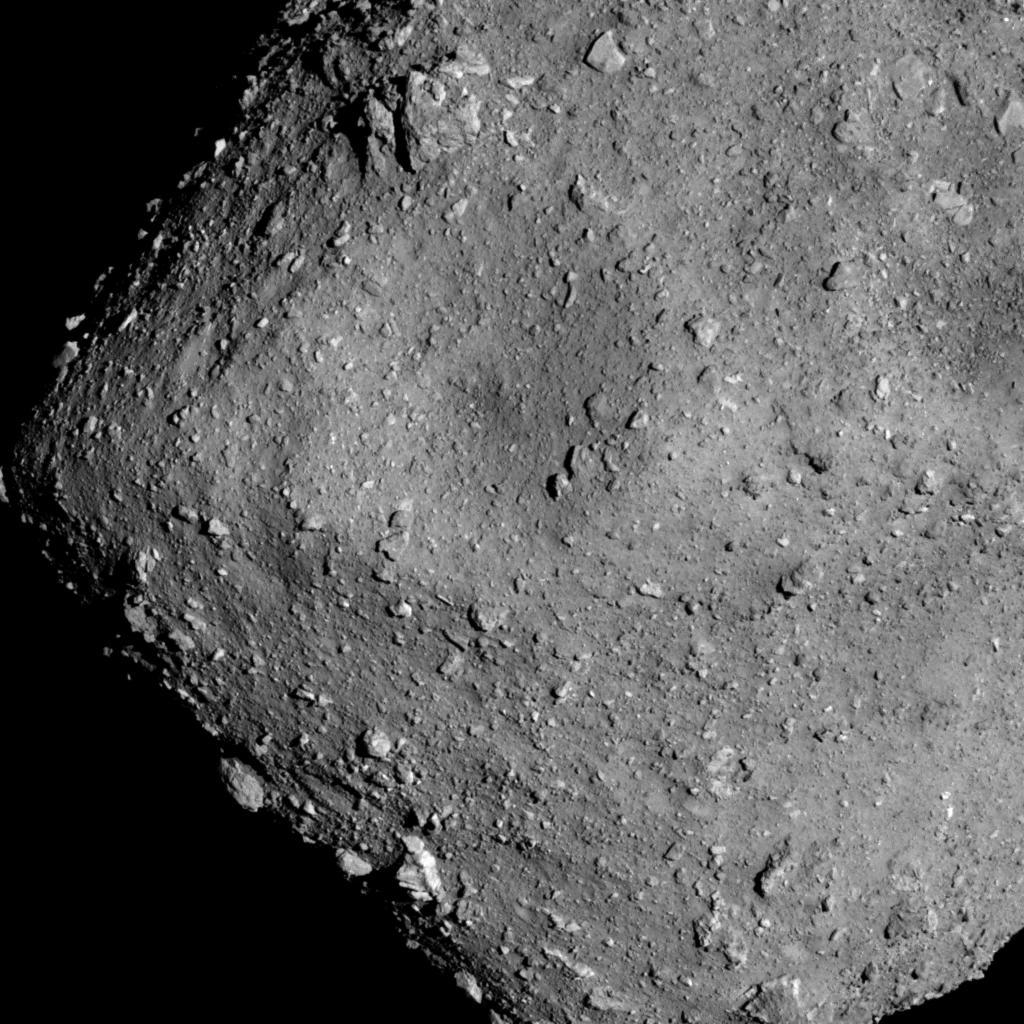 On May 9, 2003, the Japanese Aerospace Exploration Agency (JAXA) launched Hayabusa, the first mission to return an asteroid sample back to Earth. Fifteen years later, JAXA, in partnership with the European Space Agency (ESA), has sent a second mission to rendezvous with an asteroid, with the objective of returning yet another sample. Both Hayabusa missions were designed to provide insight and understanding into the building blocks of the solar system. Hayabusa brought us back pieces of 25143 Itokawa, an S-class asteroid. Hayabusa2 is on course to return samples from 162173 Ryugu, a C-class asteroid. This sample will be the first returned from a C-class asteroid.

Hayabusa2 launched on December 3, 2014, and arrived at its target, Ryugu, on June 27, 2018. This bold, exciting mission has raised the bar on its predecessor by including a lander (the Mobile Asteroid Surface Scout, MASCOT, a collaboration with ESA) and three MINERVA_II rovers, as well as targeting three touchdowns to sample the surface.

The sampling payload also includes the Small Carry-on Impactor (SCI), designed to create a crater on the surface of Ryugu. This crater will enable the spacecraft to sample more pristine materials from below the space-weathered surface. The artificially created crater will also help to measure crater scaling properties, which will provide scientists with information needed to more accurately date the surface. The main spacecraft hosts a payload that includes the Optical Navigation Camera (ONC) system, which contains two wide-angle cameras (ONC-W1 and ONC-W2, whose primary purpose is to provide optical navigation, but has also been employed to monitor the release and decent of the lander and rovers) and a narrow-angle camera (ONC-T, equipped with seven color filters to measure the broadband spectral behavior in the visible), the Light Detection and Ranging (LIDAR) altimeter (also used for navigation during the lander release, rover release, and sampling operations), the Thermal-Infrared Imager (TIR), and the Near-Infrared Spectrometer (NIRS3). The Deployable Camera (DCAM3) is a releasable imager, whose purpose is to image the cratering event prior to sampling while the main spacecraft hides from the ejecta.

The ESA-provided MASCOT lander contains its own payload for examining the surface. MASCOT carries a magnetometer, a radiometer, an infrared spectrometer, and a camera capable of imaging the small-scale structures and textures of the regolith (the ground-up top layer of the surface). MASCOT has the capability to “tumble” and reposition itself across the local surface, thus providing the mission with the capability to characterize the regolith at multiple locations. MASCOT was deployed to Ryugu’s surface on October 3, 2018, and collected data for 17 hours until its battery ran out.

The MIcro-Nano Experimental Robot Vehicle for the Asteroid (MINERVA)-II rovers are successors to the MINERVA lander on the original Hayabusa mission. MINERVA-II-1 carries rovers Rover-1A and Rover-1B, which were developed by JAXA. They move by hopping within Ryugu’s microgravity. Their payload includes stereo and wide-angle cameras and a thermometer. MINERVA-II-2 carries a single rover, Rover-2, developed by a consortium of Japanese universities led by Tohoku University. It also travels by hopping across the surface. Its payload consists of two cameras, a thermometer, and an accelerometer. The MINERVA-II-1 rovers were deployed to Ryugu’s surface on September 21, 2018. As they are solar powered, they are still operating. MINERVA-II-2 will be deployed in mid-2019.

Ryugu is also a near-Earth asteroid, and therefore has an orbit that not only approaches that of Earth, but also brings it closer to the Sun than asteroids that reside in the main belt (located between the orbits of Mars and Jupiter). Ryugu’s surface is alternately heated and cooled by the Sun as it rotates, which contributes to the thermal processing of the surface.

Prior to Hayabusa2’s encounter with Ryugu, little was known of this asteroid. Groundbased spectra indicated that it was a dark object, but few diagnostic mineral features were seen. The presence of the hydrated mineral feature typically observed at 0.7 micrometers was present in some, but not all, observations. The early data returned from Hayabusa2 have shown that Ryugu is still quite mysterious.

The first images of Ryugu (Fig. 1) revealed a top-shaped object with an orbital period of ~7.6 hours. Ryugu displays a dark, rocky, hummocky surface. There are boulders everywhere! Boulders of various sizes are strewn across the entire surface, making the selection of touchdown (for sampling) and landing sites (for the safe decent of landers and rovers) extremely challenging. Distinctive features include craters and a ridge along the asteroid’s equator, along with a large boulder near the south pole (top of image). Ryugu rotates in a retrograde direction, thus placing the “south pole” at the top of the image. 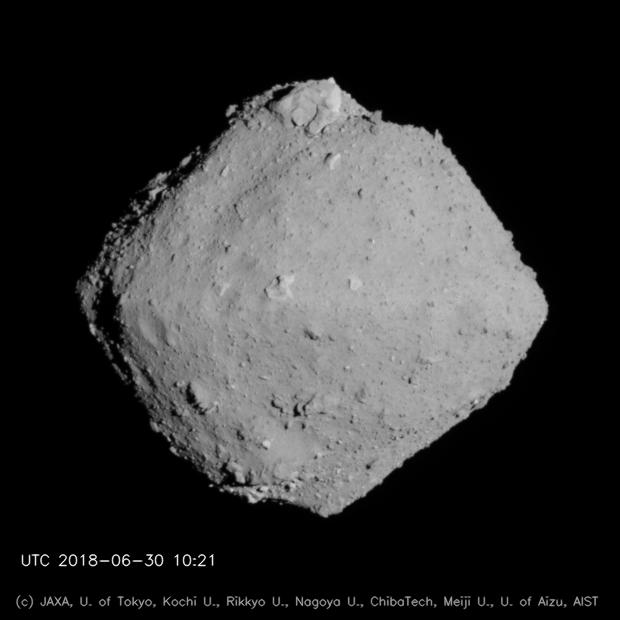 Fig. 1. Image of the asteroid 162173 Ryugu taken on June 30, 2018, shortly after arrival into the home position, 20 kilometers from the asteroid. In this image, south is at the top. A large boulder can be seen at the south pole (top of image, as Ryugu is a retrograde rotator). Credit: JAXA, Tokyo University, Kochi University, Rikkyo University, Nagoya University, Chiba Institute of Technology, Meiji University, Aizu University, and AIST.

Fig. 2. This image of 162173 Ryugu was acquired on July 20, 2018 from an altitude of 6 kilometers. The large crater on the equator, which makes Ryugu resemble a beaten up Death Star, is seen in the center of the image. Credit: JAXA, Tokyo University, Kochi University, Rikkyo University, Nagoya University, Chiba Institute of Technology, Meiji University, Aizu University, and AIST. 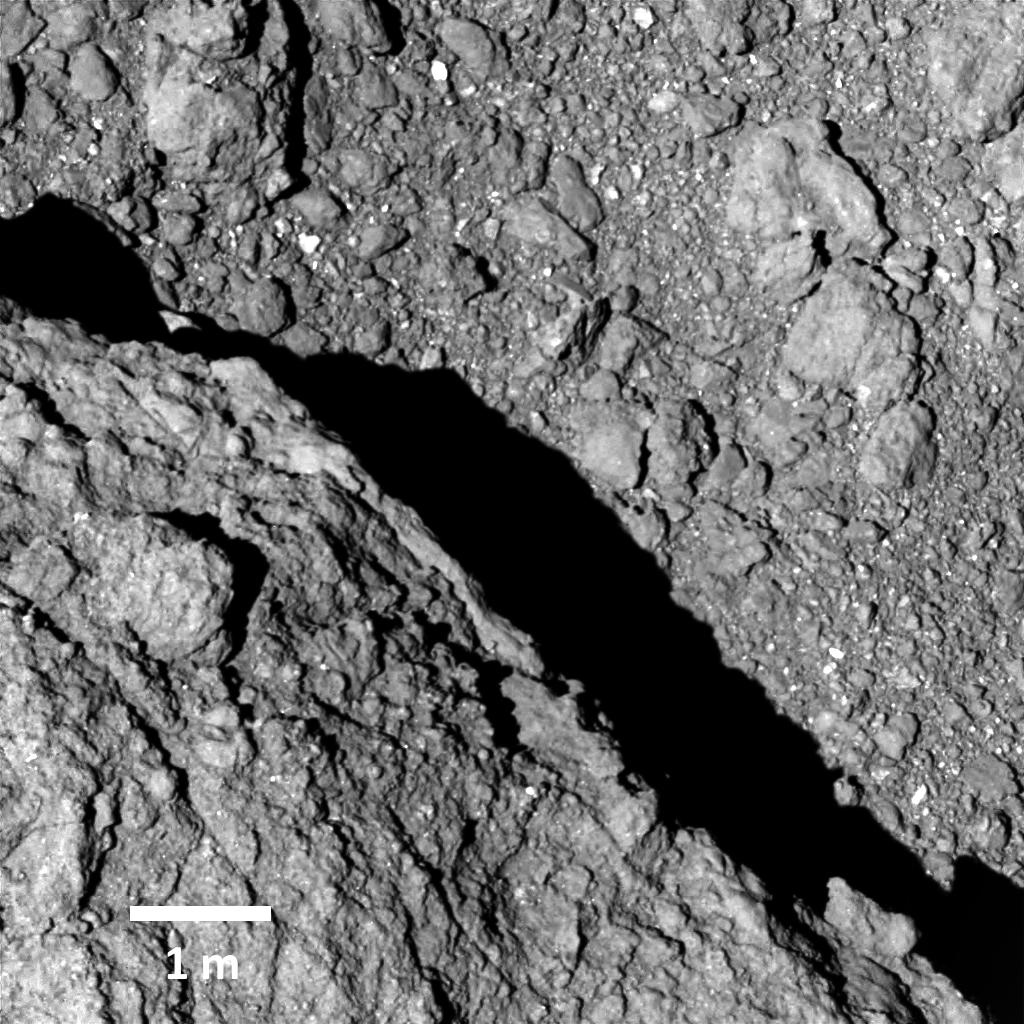 Images taken with the TIR (Fig. 4) indicate that the temperatures across Ryugu’s surface are not uniform. In fact, images taken from the home position shortly after arrival show the northern hemisphere is warmer than the southern hemisphere. 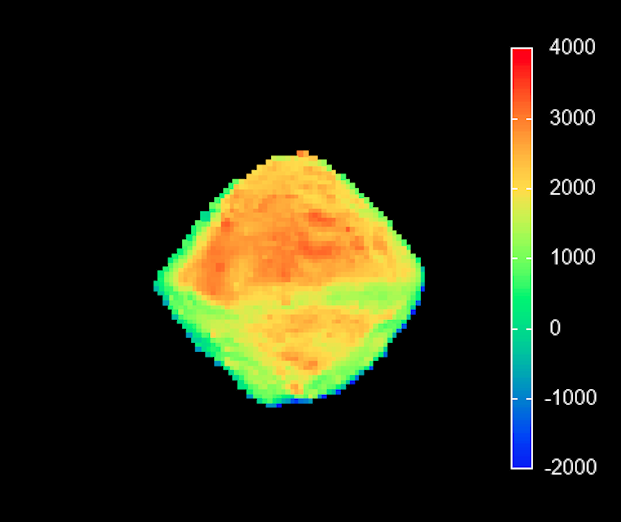 Fig. 4. Images of 162173 Ryugu taken by the TIR on June 30, 2018, show that the northern hemisphere is much warmer than the southern hemisphere. The numbers on the scale are relative, where blue indicates colder regions and red indicates warmer regions. Credit: JAXA, Ashikaga University, Rikkyo University, Chiba Institute of Technology, Aizu University, Hokkaido University of Education, Hokkaido Kitamihito.

The mission plan is an exciting blend of landers, rovers, an impact experiment, and sample collection, in addition to the intriguing observations to be acquired from the main spacecraft. Operations are defined by spacecraft position, where observations taken from the 20-kilometer “home position” are considered to be Box-A operations (Fig. 5). Box-B operations are conducted at the same altitude as Box-A; however, they include maneuvers of the spacecraft in the horizontal direction with respect to the initial Box-A position. Box-C observations are those where the spacecraft remains in a parked position but lowers its altitude. For example, images were acquired from 1000 meters above Ryugu during Box-C activities with both the ONC wide-angle and telescopic cameras. These images provide the science team with high-spatial-resolution images that can be used along with lower-resolution images to keep the observations in global context (Fig. 6). 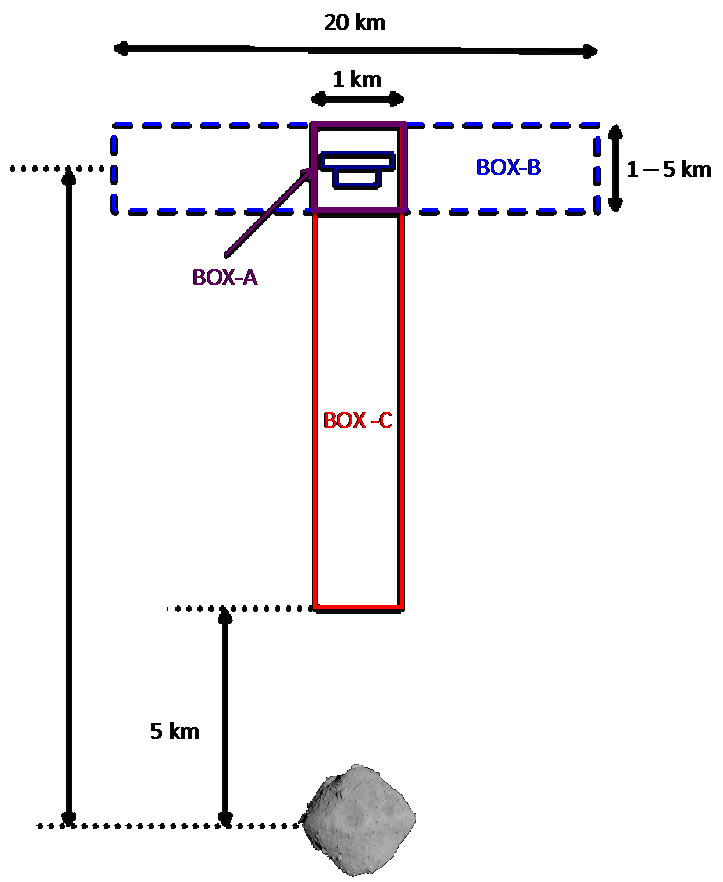 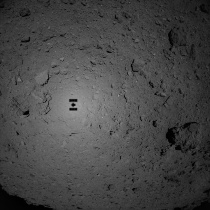 Fig. 6. This image was taken by the ONC-W1 camera during the touchdown rehearsal operations October 14–16, 2018. The shadow of the Hayabusa2 spacecraft can clearly be seen on the surface of Ryugu. Credit: JAXA, Tokyo University, Kochi University, Rikkyo University, Nagoya University, Chiba Institute of Technology, Meiji University, Aizu University, and AIST.

Hayabusa2 has wrapped up its early mission operations phase and has segued into its landed operations. The MINERVA-II-1 rovers are currently active on the surface. Images acquired from the rovers show a highly rocky terrain (Fig. 7). ESA’s MASCOT lander, successfully deployed on October 3, 2018, has also been operating on the surface. Images acquired by the ONC wide-angle camera captured the deployment of the MASCOT lander onto the surface (Fig. 8). 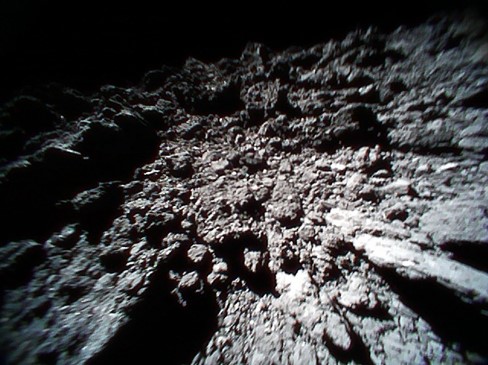 Fig. 7. This image of Ryugu’s surface was taken by Rover-1B on September 23, 2018, after landing on the surface. This image shows that the surface is rocky, even at small spatial scales. 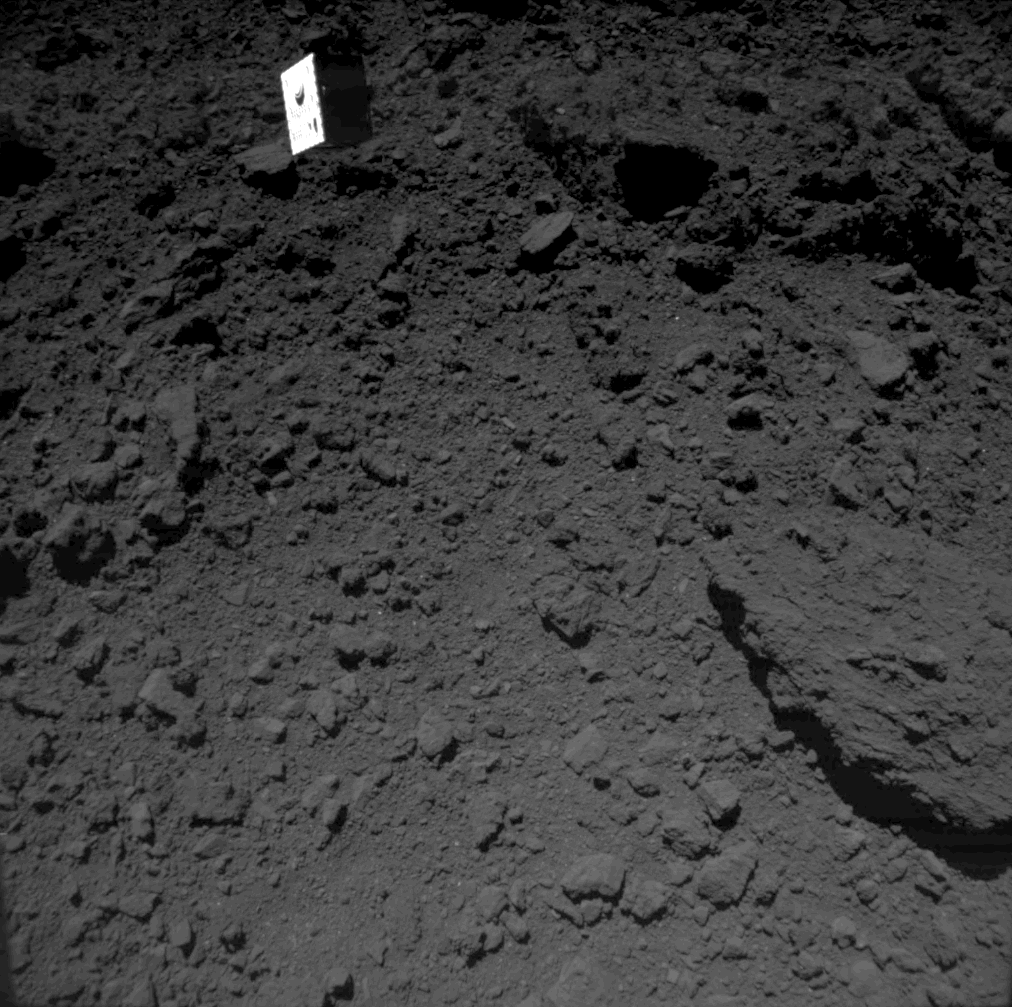 Fig. 8. The MASCOT lander’s (upper left side of the image) deployment onto the surface of Ryugu was captured by the ONC-W1. Here MASCOT is still above the surface.

The first of the three touchdown and sample retrievals is planned for early 2019, after the spacecraft comes out of solar conjunction (which lasts from late November through December 2018). Landing site selections (Fig. 9) were made primarily based on safety factors (minimizing large boulders and surface slopes) as well as selecting a site that might offer the best opportunity to understand Ryugu’s mineralogy. The strategy has been to select sites that offer an opportunity to return the least-processed, most-pristine materials possible. 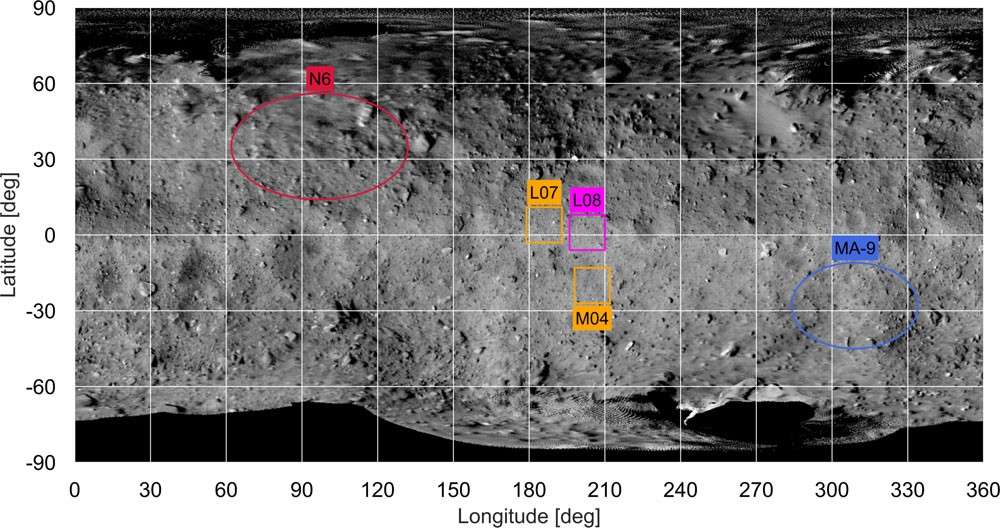 Early next year, JAXA will start the sample collection phase of the mission in three parts. The first two consist of floating down to the surface, and firing solid metal slugs into the regolith. The goal is to launch dust toward the probe for collection. The third requires Hayabusa2 to access material that’s currently buried beneath the surface. It will use a small explosive projectile to make a crater before diving in to scoop up material. In total, JAXA hopes to send 100 milligrams of dust back to Earth.

Hayabusa2 is well on its way to meeting all three of the mission’s objectives.  The first is to expand our scientific knowledge. By analyzing Ryugu’s materials, we will get closer to learning about the solar system’s origins and evolution, as well as the emergence and history of life. We know that the asteroid contains carbon, so we could discover water or organic materials, which are the basic building blocks of life.

The second objective is to maintain and develop the technology for exploring outer space. This precision explorer’s construction is the sum of technological, scientific, and industrial capability. It is important for us to use the experience we’ve gained in order to make our space technology even more sophisticated.

The third objective is to venture out into the frontier and broaden the range of human activity in space. Hayabusa2 will have a ripple effect in industry and society, and will provide an educational experience for today’s youth. Space exploration missions are not short-term projects, and we will need the help of today’s younger generation. We will teach the people who will succeed us, and continue the exploration of space.