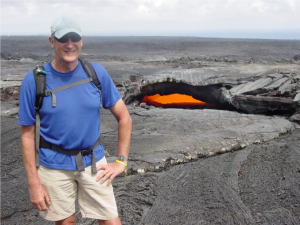 Ian Stewart McCallum, geologist and professor emeritus at the University of Washington, Seattle, died peacefully of liver cancer on May 4, 2018, surrounded by his family in his home in Seattle. He was 80 years old.

McCallum was born on December 13, 1937, in a small, rural village near Stirling, Scotland. He attended Stirling High School and then St. Andrews University, where he played soccer and discovered his passion for geology. After graduating in 1960 with B.Sc. with first class honors, he emigrated to Canada, taking a job as an exploration geologist in western Quebec. In 1962, he moved to Chicago, where he resumed his studies at the University of Chicago. Six years later, with a Ph.D. in geology, McCallum moved to the University of Oregon for post-doctoral studies. In 1970 he was appointed to the faculty of what was then the Department of Geological Sciences at the University of Washington, where he spent the rest of his career. He retired in 2010.

McCallum was well known for seminal research in a number of areas. He elucidated the magmatic processes that have determined the character of the Moon, drawing analogy between lunar rocks and those in the Stillwater Complex, a layered mafic intrusion exposed in the Beartooth Mountains of Montana. He will long be remembered for his many outstanding contributions to our understanding of lunar crustal rock suites and the magmatic evolution of the Moon.

The Stillwater Complex was McCallum’s first love, however, and he studied it intensely for more than 20 years. There he and his students conducted the first modern stratigraphic study of the body and developed petrologic models to account for the unusual layering and the origin of its economically important platinum-group element deposit, for which the Stillwater is best known. Later in his career he turned his attention to the character and origin of Mount Baker, a subduction-related Cascade volcano.

McCallum never forgot his Scottish roots. His taciturn and unassuming character belied a gregarious streak that endeared him to colleagues and students alike. He was a masterful teacher, a brilliant mind and highly respected in his field, a gentle and thoughtful man, a lover of life, a devoted husband and father, and one who always put the needs of others above himself.

— Text courtesy of the University of Washington