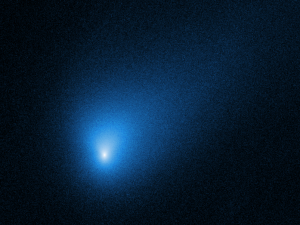 Did you know a comet could shed up to 30 liters (8 gallons) of water per second? That’s exactly what the interstellar Comet 2I/Borisov did, according to a recent NASA article highlighting the research of Dennis Bodewits, Auburn University associate professor in the Department of Physics, and Zexi Xing, a graduate student at the University of Hong Kong and Auburn, whose collaboration measured the water production of Comet 2I/Borisov as it approached the Sun.

Bodewits used both the Hubble Space Telescope (HST) and the Neil Gehrels Swift Observatory space telescope to research interstellar Comet 2I/Borisov. The comet was discovered traveling through our solar system in late 2019, and is only the second comet observed that originated from outside our solar system.

Xing, who studied at the University of Hong Kong and is from mainland China, recorded the activity of the comet using ultraviolet light. She led the work on the Neil Gehrels Swift Observatory space telescope that will be published in Astrophysical Journal Letters and promoted by the American Astronomical Society.

Bodewits uses laboratory astrophysics to understand more about the water in comets. His research provides insight about the origins of the universe and tells us more about planetary objects from millions of years ago.

As was highly publicized, the comet contained very large amounts of carbon monoxide gas, and Bodewits used it trace the origins of the object to planetary systems with much colder temperatures than ours. Such environments can be found around M-type stars, red dwarfs that are the most common stars in our galaxy.

Nature Astronomy published research from Bodewits titled “2I/Borisov is a carbon monoxide-rich comet from another star.”

Portions of this article were provided by Auburn University.