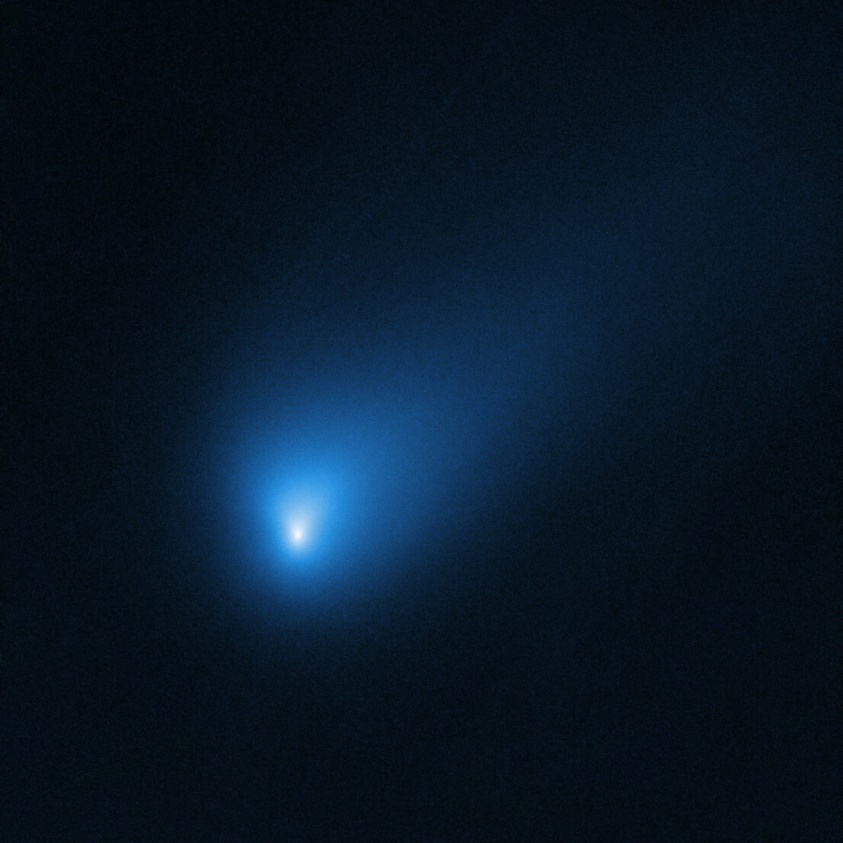 An image of the interstellar comet 2I/Borisov observed from the Hubble Space Telescope on October 12, 2019. Credit: NASA/ESA/Hubble/D. Jewitt, UCLA.

Astronomers spotted something incredible in Earth’s backyard: a rogue comet from another star system in 2019. Named Borisov, the icy snowball traveled 180,000 kilometers per hour (110,000 miles per hour) and marked the first and only interstellar comet ever detected by humans.

But what if these interstellar visitors — comets, meteors, asteroids, and other debris from beyond the solar system — are more common than people think?

In a new study published in the Monthly Notices of the Royal Astronomical Society, astronomers Amir Siraj and Avi Loeb at the Center for Astrophysics (CfA) Harvard and Smithsonian present new calculations showing that in the Oort cloud — a shell of debris in the farthest reaches of Earth’s solar system — interstellar objects outnumber objects belonging to the solar system.

“Before the detection of the first interstellar comet, we had no idea how many interstellar objects there were in our solar system, but theory on the formation of planetary systems suggests that there should be fewer visitors than permanent residents,” said Siraj, a concurrent undergraduate and graduate student in Harvard’s Department of Astronomy and lead author of the study. “Now we’re finding that there could be substantially more visitors.”

The calculations, made using conclusions drawn from Borisov, include significant uncertainties, Siraj points out. But even after taking these into consideration, interstellar visitors prevail over objects native to the solar system.

“Let’s say I watch a mile-long stretch of railroad for a day and observe one car cross it,” Siraj said. “I can say that, on that day, the observed rate of cars crossing the section of railroad was one per day per mile. But if I have a reason to believe that the observation was not a one-off event — say, by noticing a pair of crossing gates built for cars — then I can take it a step further and begin to make statistical conclusions about the overall rate of cars crossing that stretch of railroad.”

But if there are so many interstellar visitors, why has only one been seen?

“We just don’t have the technology to see them yet,” Siraj said.

Consider, he said, that the Oort cloud spans a region some 200 billion to 100 trillion miles away from the Sun — and unlike stars, objects in the Oort cloud do not produce their own light. Those two factors make debris in the outer solar system incredibly hard to see.

Senior astrophysicist Matthew Holman, who was not involved in the research, said the study results are exciting because they have implications for objects even closer than the Oort cloud.

“These results suggest that the abundances of interstellar and Oort cloud objects are comparable closer to the Sun than Saturn,” said Holman, who is the former director of the CfA’s Minor Planet Center, which tracks comets, asteroids, and other debris in the solar system. “This can be tested with current and future solar system surveys. When looking at the asteroid data in the region, the question is: Are there asteroids that really are interstellar that we just didn’t recognize before?”

Holman explained that some asteroids get detected but are not observed or followed up on year after year. “We think they are asteroids, then we lose them without doing a detailed look.”

Loeb, the study co-author and Harvard astronomy professor, added that “interstellar objects in the planetary region of the solar system would be rare, but our results clearly show they are more common than solar system material in the dark reaches of the Oort cloud.”

Observations with next-generation technology may help confirm the team’s results.

The advent of the Vera C. Rubin Observatory, slated for 2022, will “blow previous searches for interstellar objects out of the water,” Siraj said, and hopefully, help detect many more visitors like Borisov.

The Transneptunian Automated Occultation Survey (TAOS II), which is specifically designed to detect comets in the far reaches of Earth’s solar system, may also be able to detect one of these passersby. TAOS II may come online as early as this year.

“The abundance of interstellar objects in the Oort cloud suggests that much more debris is left over from the formation of planetary systems than previously thought,” Siraj said.

“Our findings show that interstellar objects can place interesting constraints on planetary system formation processes since their implied abundance requires a significant mass of material to be ejected in the form of planetesimals,” Siraj said. “Together with observational studies of protoplanetary disks and computational approaches to planet formation, the study of interstellar objects could help us unlock the secrets of how our planetary system — and others — formed.”