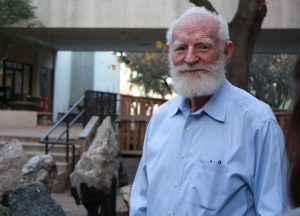 Credit: University of Texas at Dallas

Dr. James Carter, associate professor emeritus and one of the longest-serving faculty members at The University of Texas at Dallas (UT Dallas), died in Richardson, Texas, on September 21. He was 82.

Carter grew up in McAllen, Texas, and earned his bachelor’s degree in mining and geological engineering from Texas Western College, now The University of Texas at El Paso, in 1961 and his Ph.D. in geochemistry from Rice University in 1965. Carter joined the Graduate Research Center of the Southwest (GRCSW) — the precursor institution to UT Dallas — as a postdoctoral researcher in 1964. He remained with the GRCSW when it became UT Dallas in 1969 and retired in 2008 after 43 years of teaching and research.

Throughout his career as a geoscientist, Carter studied everything from Earth’s upper crust to environmental geochemistry to paleontology. A leading expert on lunar geology, Carter was one of the scientists who analyzed samples of Moon rocks brought back from the Apollo missions. NASA contacted him in the early 1990s to help create a material that was similar to actual lunar soil in chemical composition, texture, mineralogy, and other properties. The material was produced for engineering and equipment studies in support of future human activities on the Moon. Carter founded a company called ETSimulants to make and ship tons of the lunar regolith simulant, or fake Moon dirt, to NASA and other researchers.

He also made a name for himself when he discovered and helped excavate the articulated neck of an Alamosaurus in Big Bend National Park. One of the largest dinosaur fossils ever found in Texas, the skeleton is on display at the Perot Museum of Nature and Science.

Carter, who served as head of the Department of Geosciences from 1985 to 1993, taught classes, mentored many graduate students and led numerous geology field camps. When he retired, the School of Natural Sciences and Mathematics recognized the professor and his years of service by establishing the James L. Carter Scholarship/Fellowship Endowment Fund for students pursuing degrees in geosciences. The James L. Carter Master’s Scholarship Fund for Geosciences was subsequently established in 2016.

— Text courtesy of The University of Texas at Dallas