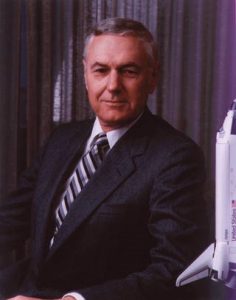 In a statement about Beggs’ passing, current NASA Administrator Jim Bridenstine said, “NASA sends its condolences to the family of James Beggs. Mr. Beggs led the agency during the earliest days of the Space Shuttle Program and helped us open a whole new era of exploration. We continue to build on his legacy today as we take advantage of our long-term presence in low-Earth orbit to make the advances to travel farther, and seed an entirely new segment of the economy through the innovations of commercial partners. Mr. Beggs also served his country in the U.S. Navy and supported NASA’s achievements during the Apollo era during an agency tenure in the late 1960s. His legacy guided the shuttle program toward its three decades of achievements and set the stage for a diverse and flexible astronaut corps from which we continue to benefit. We salute his service and will continue to honor his contributions to our great agency.”

Prior to his appointment as NASA Administrator Beggs had been Executive Vice President and a director of General Dynamics Corp., St. Louis, Missouri. He had previously served with NASA from 1968 to 1969 as Associate Administrator, Office of Advanced Research and Technology. From 1969 to 1973, he was Under Secretary of Transportation. He went to Summa Corp., Los Angeles, California, as Managing Director, Operations and joined General Dynamics in January 1974. Before joining NASA, he had been with Westinghouse Electric Corp., in Sharon, Pennsylvania, and Baltimore, Maryland, for 13 years. Following his tenure at NASA, Beggs worked as a consultant from his offices in Bethesda, Maryland.

A 1947 graduate of the U.S. Naval Academy, he served with the Navy until 1954. In 1955, he received a master’s degree from the Harvard Graduate School of Business Administration. He was also a member of the Board of Governors of the National Space Club and the American Astronautical Society; his other professional affiliations included the National Academy of Public Administration, the American Institute of Aeronautics and Astronautics, the American Society of Naval Engineers, and Sigma Tau.