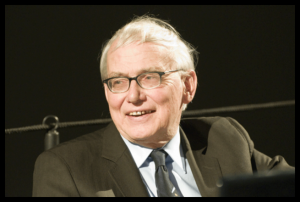 Geiss was born on September 4, 1926, in Stolp in what was then Western Pomerania as the son of an estate manager. How different the world must have looked at that time, when his grandfather had to hitch the horse to a cart every two days in order to travel to the barber in the neighboring village for a shave. Who could have imagined that, not even 50 years later, his grandson would develop an experiment that would land on the Moon.

Geiss’ first position as a physicist was at Fritz Houtermans’ institute at the University of Bern. Houtermans wanted to apply mass spectrometry, with which Geiss had successfully been able to determine the isotopic composition of lead, to determine the age of meteoric matter. So, at the beginning of the 1950s, his glass mass spectrometer with him, he went to Bern, which would become the new center of his life, and by 1974 he was a naturalized citizen of Switzerland.

Geiss brought a breath of fresh air to an institute that was perhaps a little outdated at the time, and soon found enthusiastic companions to establish a group that would quickly make a name for itself in astrophysics. Periods spent abroad in Chicago with Harold Urey and as a young professor in Miami broadened and rounded out his education; in between, he habilitated in experimental physics, in particular extraterrestrial physics, at the University of Bern in 1957. He was appointed as an associate professor in 1960 and as a full professor in 1964. At the beginning of the 1960s, he had to take over management of the institute for the increasingly ill Houtermans, and was thus appointed director of the institute following Houtermans’ death in 1966, a position which he held until his retirement in 1990.

Geiss was pulled to other places time and again in order to maintain and develop his ever-growing network. He spent the year before the Apollo 11 landing on the Moon at NASA in Houston in order to lobby for the ingeniously simple solar wind sail developed by him and his group. The solar wind would be captured with an aluminum foil during the astronauts’ time on the surface of the Moon, as the solar wind arrives there unhindered because of the Moon’s lack of an atmosphere and a magnetic field. The simplicity of the experiment and the excellent reputation of the Bernese mass spectrometer made him perfect for the job. But it took great tenacity, coupled with enthusiasm and a necessary bit of luck for the sail to fly with Apollo 11 in July 1969 and then an additional four times. Its analysis, in particular the ratio of the helium isotopes captured, corresponded to a measurement of the average density of the universe as a whole — a groundbreaking result for which he, together with Hubert Reeves, was awarded the Einstein Medal by the Albert Einstein Society in Bern in 2001.

In addition to isotope geochronology, Geiss’ scientific interest was primarily focused on space plasmas. In addition to his groundbreaking experiments onboard the Apollo spacecraft, Geiss also investigated the composition of matter in the Earth’s environment, the Sun, and interstellar gas. He was involved in numerous space missions such as the Ulysses deep-space probe, the Solar and Heliospheric Observatory (SOHO), and the Cassini/Huygens mission to study the saturnian system. Even after his retirement, Geiss remained a man of action in the field of space research. He played a major role in the founding of the International Space Science Institute in Bern, which he headed initially as founding director and then as honorary director until his death.